Indi Madar was about seven years old when she and her mum moved from Djibouti to Canada. Today, Indi is a graduate student at the University of Waterloo’s Faculty of Environment, working towards a master’s degree in Sustainability Management. She is actively involved in university affairs and is a communications officer for UW’s Graduate Student Association. 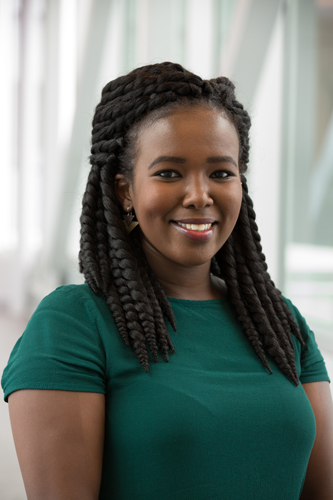 Djibouti is a very small country—it’s about the size of the state of New Jersey, and Djibouti City’s population is similar to Kitchener’s. We’re a very diverse country. There are a lot of Ethiopians, Somalis, Yemenis, Arabs and Lebanese, and we speak several languages. The primary one is Somali, but other languages are Afar, Arabic, Habesha, Oromo, and French—because we used to be a French colony. English is spoken more and more, with the American influence.

The main reason we left Djibouti was economic. At the time, my mom had a business—a gas station—but it was faltering. Before then, she operated a restaurant.

I was about six or seven years old when my mom and I left. My older brother and younger sister didn’t come with us, and they were left to the care of our family (since then, my mom had another son here in Canada). At the time, my older brother was in his teens and he was getting settled in school; she didn’t want that shift for him. My little sister was just way too young to go. My mom said to me, “You are not of the age where I have to teach you to walk or eat or whatnot, and not too old so that taking you out of school is going to be a big shift. You’re in-between.”

We stopped in the US for less than six months. My mom had friends in Atlanta, and we went there because she wanted to see what it was like. We then went to Washington DC, before we came to Canada.

Ottawa and the Somali diaspora

We visited Ottawa because my grandmother knew how close the sisters were, so she said, “You can’t be in North America and not see your sister.” My mom hadn’t seen her sister in about 15 years. We made the shift to Ottawa because my aunt was there.

I would say it took my mom two or three years to be settled here. That included earning a college diploma, getting volunteer experience, and finding employment. My mom is a personal support worker and primarily works with the elderly population.

In Ottawa, there are pretty significant Somali, Djibouti, and East African diasporas. There were Somali stores in Somali neighbourhoods. My mom wanted that support system, along with her sister, and other people around her. I think she also wanted me to continue my education in French.

The food in Djibouti is really, really good. A typical dinner would be skoudehkaris (Djibouti’s national dish—a hearty flavourful lamb stew cooked with tomatoes and a number of spices) served with rice, salad, and hot sauce. Beef suqaar (recipe follows) is a dinner staple. Our diet is very meat-based. Lamb, beef, goat, and chicken—everything along those lines. Pork, we don’t eat because we’re Muslim. Our dishes have a lot of onion and garlic—we love onions and garlic—green peppers, tomatoes. We like chilli—chilli spices and chilli peppers.

We like our rice. Bariis fahfah is rice cooked in beef broth. We make surbiyaan by adding the raisins, the food colouring, the grilled onions, the cinnamon sticks, and the clove to the rice. It takes much longer to make and is served with the broth of the lamb for flavour.

Passing on traditions to a new generation

Sometimes I think, especially for the diaspora that is here, common dishes like beef suqaar get passed down, because they are fairly quick, and beef is more accessible than lamb. I don’t think dishes like zab (slow-cooked spiced roast lamb, then served over rice) get passed down as they should. My generation would say, “When would I ever make lamb? That’s so expensive!” These dishes also take little bit more time, so, to learn how to do them well, you have to spend that day learning from your parents.

Food for a feast

If you’re having a gathering or a special occasion, you have to provide lamb. In Djibouti, you prepare for the big events by raising the animal or going to visit it. My mom told me in Ottawa different families pool their funds together and visit a farm to “raise it” but that doesn’t happen often. It is more likely that you will go to your local Somali butcher and just get a good cut of meat

On Eid and for the whole month of Ramadan we go all-out. We have beef suqaar and sambusas (samosas—fried or baked triangular dough parcels, filled with beef, onions, and green chilli peppers). I love sambusas. I’ve mastered the filling, but I don’t think I have the fingers to make the paste (pastry) or do the rolling. I just can’t make the actual triangles. My mother says I don’t have the patience for it. She tried for a long time to teach me and she finally said, “Okay, you make a really good filling, you take care of that, and I’ll take care of putting it in (the pastry).”

We have a few breads like kac kac (a beignet or a square sweet doughnut) and sabayaad (a pan-fried flatbread, similar to a chapatti). We have something I love called khameer—it’s a lightly-sweetened dough that’s been deep-fried. It’s not as filling as bread, but a little on the lighter side. You can have it on its own, but people usually serve it with hot sauce. You can also serve it with honey or fruit. During Eid in Djibouti, cambabuur (a fermented crêpe, flavoured with saffron, turmeric, cumin, garlic, and onion) is a breakfast staple. We serve it with yoghurt for dipping.

If it’s a special occasion then definitely we have the sweets. Otherwise they are not very common on a typical dinner night. A lot of our sweets are influenced by Arab foods. We’ll have the baklavas (pastry made of layers of filo filled with chopped nuts and sweetened and held together with syrup or honey), the xalwo/halwo (halva – a dense, sweet confection, made from sugar, cornstarch, and ghee (clarified butter) and spices such as cardamom or nutmeg powder) or the labaniyad (a custard or milk pudding flavoured with cardamom or other spices).

Indi’s five tips for those who want to try Somali food:

This interview has been condensed and edited for clarity. 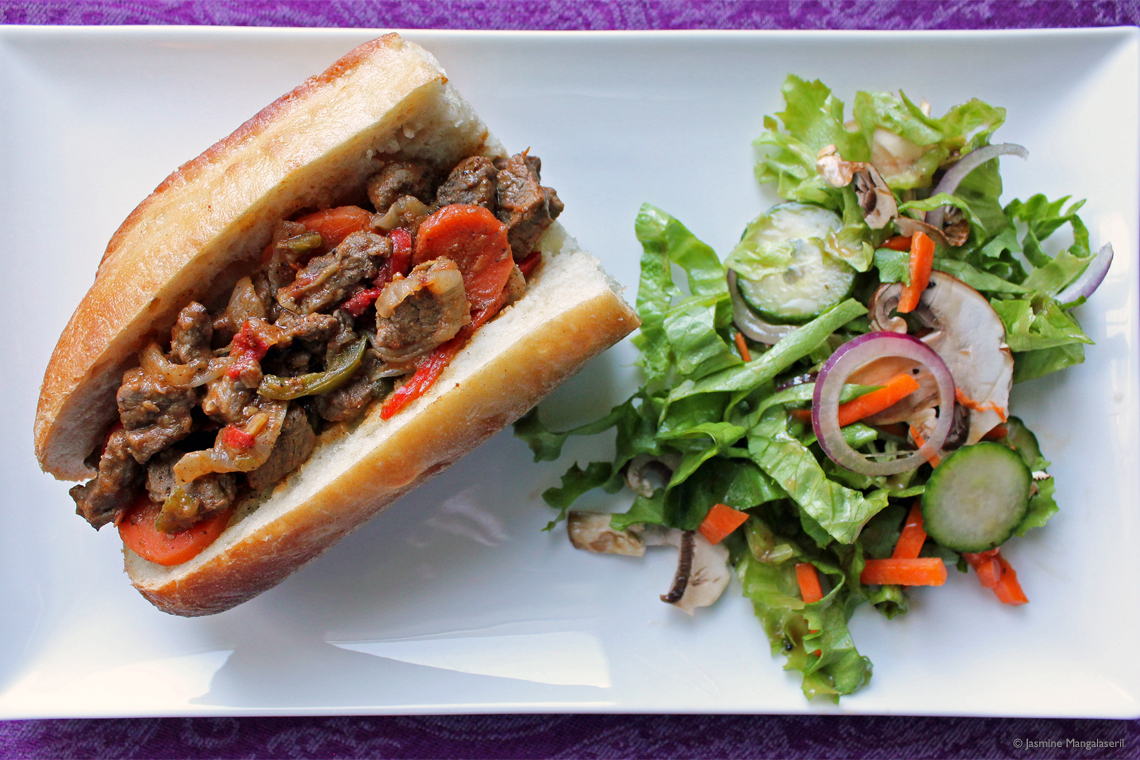 Beef suqaar is a really hearty and simple meal. You could have it with rice or pasta or on a baguette. Take the time to stew it and make sure everything is just soaked into the meat and the veggies, so it’s flavourful. It’s something that we have for dinnertime. It’s quick—I think that’s why it’s something that gets passed down to generations.

Beef suqaar is a quick and versatile beef and vegetable dish that’s a cross between a stew and a stir-fry. “Suqaar” comes from an Arabic word, meaning “small ones.” Here, the small ones refer to the small pieces of meat—the butcher I went to cut the cubes to about 1.3 cm (½-inch), but you can cut them smaller (0.5 cm or ¼-inch). This version features a thick, spicy tomatoey gravy.

Heat the olive oil and add the beef, onion, garlic, carrots, stock cube, and spices. Stir well and sauté for few minutes (the meat doesn’t need to be fully cooked at this point).

Add a little water, carrots, tomato, and bell peppers. Continue to sauté until the meat is fully cooked and the gravy is thick. Balance flavours to taste.

Remove from heat and serve over rice, pasta or on a baguette.

Care to share a taste of home? If you’ve come to Waterloo Region and have a dish that makes you think of home or family, I’d like to hear from you. Contact me, and perhaps you and your recipe can be featured in a future A Region That Really Schmecks post.

31 March 2017 by Jasmine Mangalaseril | Comments Off on In their words: Indi Madar’s Beef Suqaar