Originally from Seoul, South Korea, Jennifer Roggemann was 16 years old when she and her family immigrated to Canada, on a cold, grey December day in 1987. She arrived with very little knowledge of her new home and with little English. Today, she is an immigration lawyer and draws upon her first-hand experience to help hundreds of newcomers choose Canada. Jennifer is married to another first-generation Canadian, and together they are parents to Jarred and Janeen, teenaged twins. Her recipe for soo jae bi/sujebi, or poor man’s soup, is a family favourite.

It was December 27, and I expected lots of snow

There was snow, but it was also grey. It was like a concrete block but also so desolate. In comparison to Seoul, there was nobody. I wondered, “Where is everybody?”

I was in Grade 10 when we came. When I was told our family was moving to Canada, I didn’t know what to say, because I didn’t know what it meant. I don’t think we expected to stay here for a long time, to tell the truth. My parents had this idea that we’d come, study, and check Canada out, but we’d probably return to South Korea. That was probably why I didn’t make a big deal of it. I also didn’t know much about Canada, except that it was north of the US. I had to go to the world map to find where this Toronto place was.

My parents wanted a better education for us, and I think they wanted a new life and something different for themselves. My father’s younger sister was a pharmacist in Toronto, and she invited my dad to come (my parents ended up running a small coffee shop for about 13 years in downtown Toronto). My dad is the eldest son of eight, so moving was a very big deal for my grandparents. Dad had a very difficult time adjusting—he went back more than once every year for the first three years (since then, my parents return every year or two).

Nobody smiled at immigration

The immigration officials didn’t smile and, because of that, they looked very scary. I didn’t speak English and couldn’t understand what was happening. All I knew was my dad was so nervous because he was signing documents and I didn’t think he actually understood what he was signing. Even though he had an English-Korean dictionary in his hand at all times, it made me nervous, even watching him!

I was extremely active in my school in South Korea; I had lots of friends, and I was in a thousand different things at the time. Seoul has so many people—it’s so bright, and things happen 24/7. There was a comfort in those noises. I think that’s why I thought it was so quiet when we came. It took me a while to get used to the stillness.

I remember my first semester in Toronto. The school put me in Chemistry class. I’d never taken it before in my life, but they thought because I’m an Asian, I should know chemistry. I remember I got the highest score in one quiz (if you think about it, chemistry formulae are all math-based, so it’s not that difficult). My teacher wrote a letter to my aunt, which said, “I’m not too sure what to say when a girl who doesn’t speak English, and didn’t learn anything from me, got the highest mark in the class. I’m not sure how to assess my teaching ability.” My aunt was on the floor laughing

That summer, I took an English as a Second Language course. One day, my teacher took all of us to McDonald’s for breakfast and said, “This is what Canadians usually eat for breakfast.” We never had McDonald’s in South Korea (we came to Canada in 1987, before 1988 Seoul Olympics)—it was very interesting. After, I took my mother for the same breakfast, to show her what Canadians eat. Let’s just say, my mom was not impressed.

Canadian food can be greasy and bland, and it has a lot of pork and beef. I also don’t like potatoes at all—they’re considered poor man’s food, back in South Korea, so I didn’t understand why I was supposed to enjoy eating them. Of course, my husband, who was raised in Germany, loves potatoes! My daughter Janeen went to Germany for a few months, when she was Grade 5. When she returned, she was a little bit taller than her twin brother, Jarred. My son looked at me and said, “It’s because of the potatoes, Mom! You fed me rice here, and I didn’t grow as much as Janeen did because she ate potatoes!” I don’t know how much truth there is, but so be it.

Chickens only have two legs

In South Korea, my family was average middle class—we never starved, but we wouldn’t be able to eat at a nice restaurant every week. The availability of food was limited in ’87, and not many things were coming into the country at the time.

Back then, you went to the market and said you liked that (live) chicken and you got a very fresh chicken with everything. If you’ve ever seen a live chicken, you know it only has two legs. In my traditional Asian family, my father got one leg (thigh and drumstick), and my brother got the other. My sister and I only got to share a leg if my dad was not present. My mother had a superstitious belief that unmarried girls who ate chicken wings would be promiscuous. Take away the wings and legs, and all my sister and I had were the breast and back.

The first time we went to the Superstore in Toronto, we just stood there in awe. Oh my goodness! Food is very abundant in Canada. This place is very blessed—that’s always the comment my husband and I make—we can eat anything and everything, and there’s so much of it. Anyway, there was a mountain of chicken legs! I still remember my mother saying, “Finally, my daughters can eat chicken legs!” For a whole month, this wonderful mom of mine cooked chicken legs for us. By the end, my sister and I said, “Please stop!” It’s still a joke in my family.

Korean cuisine has a variety of dishes, but they are very time-consuming to prepare. You chop it, you boil it, you fry it, and you shove it into a little pocket. You have to steam it, and you have to fry it again. There are also a lot of spices to mix and match.

We have many soup-based foods and steamed foods. Red meat is not as popular because we don’t have a lot of cattle. A lot of dishes are chicken-based, and we have many vegetable recipes. There’s a lot of fish because South Korea is a peninsula, but the seafood is not the same as we have here—it’s not salmon or trout. That’s what I miss the most.

Food is part of our memory: when we get together, we eat

We snacked on tteok-bokki (spicy rice cake) in elementary school and secondary school. The cake is not like the sponge cake we have here; it’s almost like pasta. My middle school friends and I usually got together at a restaurant. We would get a big pot with all the ingredients and cook it ourselves. We adjusted it for how spicy we wanted it. This is what we remember: chatting around the table and cooking and eating.

We would make thousands of dumplings

My grandmother liked to feed people, and I guess I carry that tradition. She would make kimchi (spiced, pickled cabbage) every year and keep it in an earthen pot. Since she didn’t have a refrigerator, my dad would pick it up and put it in the snow. I still remember the taste—you can’t re-create it. It’s amazing. There’s nothing like it.

My grandmother also liked to make dumplings. There’d be a big round table, with all my aunts, my mother, the next-door neighbour, and any women from around the neighbourhood. We used to make thousands of them. If you made a really pretty dumpling, they’d say, “Oh! You’re going to have a pretty daughter!” and if you made a really ugly dumpling they’d say, “Oh! I feel sorry for your daughter!” I think this was how my grandmother forced everybody to make really pretty dumplings.

Most of the time, at home we have Canadian food like pasta or a roast. Once in a while, when my husband John gets very homesick, he makes German food. On weekends, I’ll make Korean foods. I cook poor man’s soup (recipe follows) or dakjuk, which is like chicken rice soup, but it’s almost like a much thicker congee (Chinese rice porridge). On special occasions, I make short ribs, a big pot of soup, and a lot of little dishes that take a lot of time to make.

Sometimes my mom and I cook a special meal together such as kongnamul bap (pork and bean sprouts with rice), soups, short ribs or spicy noodles. I usually Skype in my sister, who lives in Vancouver and tease her by saying, “Look at what we’re making!” She gets so jealous!

Jennifer’s five tips for those who want to try Korean food for the first time:

This interview has been condensed and edited for clarity. 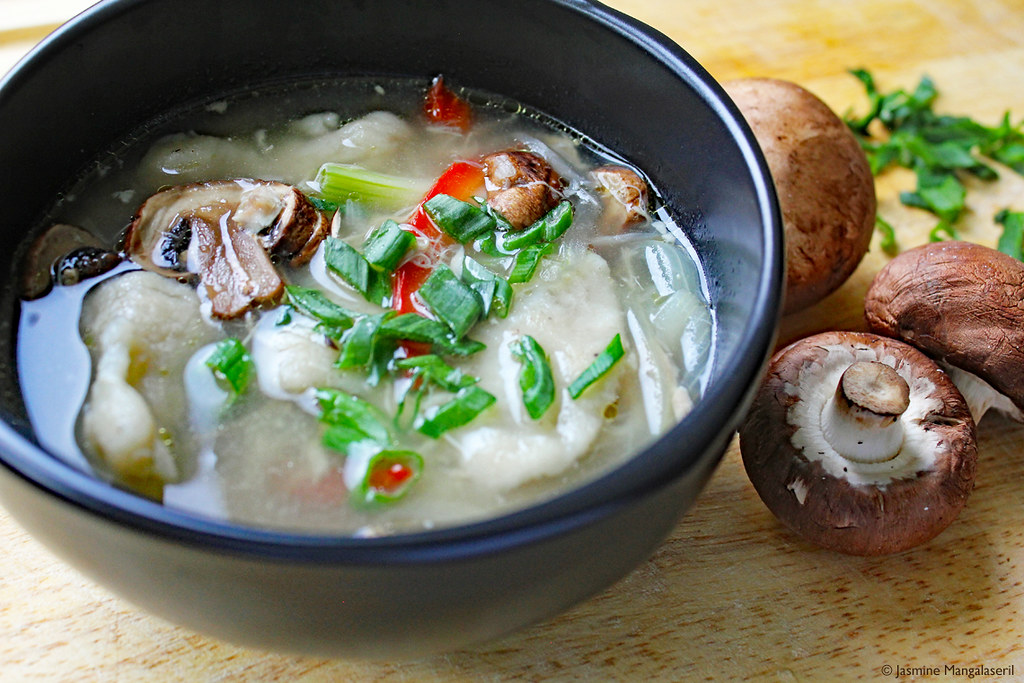 The dish I talk to everybody about is called “poor man’s soup.” I mean, we call it literally, poor man’s soup. The name is actually soo jae bi. It’s so cheap to make, but it’s very filling and has amazing flavour. My grandmother had this during the Korean War, and when my mother was pregnant with me, it was the only thing she could eat. Now, it’s my favourite dish of all time.

Soo jae bi (or sujebi) is a popular, and simple and economical Korean noodle soup, which is also called “hand torn noodle soup.” It is flavourful with a light-coloured (almost white) broth and very thin noodles. To keep its pale colour, use salt instead of soy sauce to adjust the seasoning.

Mix the salt and pepper into the flour. Mix in enough water to form a smooth and sticky dough. Form into a ball and slip into a lightly oiled zippy bag or covered bowl and rest in the fridge until you’re ready to make them.

Add the chicken to the water and bring to a boil. Lower the flame and continue simmering until the chicken is fully cooked. Remove the legs and let them rest until cool enough to handle. Then, remove and discard the skin and bones, and shred the meat.

If you wish, strain the broth through cheesecloth or a fine-meshed sieve.

Return the broth to the pot and add the meat, potatoes, onions, and garlic. Bring to a boil.

As the soup reheats, pull teaspoon-sized pieces from the dough and flatten them into thin palm-sized sheets (see notes). You can make them smaller if you wish.

When the potatoes are fully cooked, drop the noodles into the broth and cook them. Stir often to prevent sticking.

Add vegetables (if using) and cooking until tender-crisp.

Slice the white and light green parts of the green onions to 2.5 cm (1”) lengths; finely slice the dark green parts. Stir into the soup. Adjust salt and pepper to taste.

Serve soo jae bi hot, on its own or with a side of rice.

Care to share a taste of home? If you’ve come to Waterloo Region and have a dish that makes you think of home or family, I’d like to hear from you. Contact me, and perhaps you and your recipe can be featured in a future A Region That Really Schmecks post.

28 February 2017 by Jasmine Mangalaseril | Comments Off on In their words: Jennifer Roggemann’s Soo Jae Bi