Moving to the big camp near Barrie, Ontario loomed heavy over soldiers’ heads.  After four countermands, the 118th Battalion received their orders to pack and board the train to Camp Borden. “Huronto,” The Berlin News-Record’s special correspondent told readers after the boys packed everything up, they “lay around in the intense heat” with their full kits, until they left Carling Heights The Berlin Daily Telegraph said the boys weren’t happy about the orders.  Borden farther from Berlin than London, and “all the beautiful ornamental work that has been done in and around their camps will be lost.”  The Telegraph commented these skills would be put to use again when they re-established their camp.

Shortly after arriving at Borden, a few thousand men from other battalions rioted over conditions: the “tedious rehearsals in the broiling sun on a dusty plain;” the lack of bathing facilities; their dry canteen. Back home, Berliners may have drawn some solace from the news that their boys didn’t participate in the melee. Afterwards, senior officers discussed the situation and agreed that paving some of Bordens’s main roads would probably keep the dust down and help morale.

Since leaving the Berlin barracks in May, the 118th‘s numbers fell to 688 because of deserters and men with medical certificates–the troop was too small to remain its own unit. Reports circulated it would join with the 142nd, another undermanned battalion. The only solace was (if it happened) the amalgamated battalion would retain North Waterloo’s identity.

Unfortunately, Old Collie (one of the 118th’s mascots) wouldn’t join his men at Borden. Another dog mauled and partially blinded him, then he broke two legs when a car hit him. The only humane decision was to Old Collie out of his misery. “The boys gave him a military funeral, a wheelbarrow being used as a combined gun carriage and hearse.”

Borden’s headquarters declared visitors personae non-gratae, much to the disappointment of the local Recruiting League, who hoped for an excursion to the big camp. No matter, they were soon busy because Colonel Lochead, the Battalion’s CO, announced his men needed four or five field kitchens. Since these cost $1100 each (almost $22,000 – see notes on conversion), the men and women back home decided to throw a monster garden fête at Waterloo Park to raise needed funds.

A few days after Waterloo County Council voted 11:5 to pass a resolution asking the Lieutenant Governor in Council to delay changing Berlin’s name to Kitchener, a deputation met with Premier Hearst to ask for the same—and a bit more.

The delegation presented the petition asking the Legislature withhold consent until after the next municipal election; otherwise, they should approve amalgamation and rename the city “Waterloo,” all in one fell swoop.

Berlin’s former mayor, JR Eden explained when the Patriotic Fund  launched, “an agitation was started by some to have the name of the city changed in the belief that it should help in the raising of the fund.” In explaining why the Battalion was under-subscribed, pointed to the community’s history. First, Mennonites, who opposed bloodshed, founded the County and those values ran deep. Second, 19th-Century German émigrés–some of whom were still in the–came here to escape German militarism: while loyal to the Allied cause, had problems sending sons or grandsons to the front because the enemy was still blood kin.

Premier Hearst saw amalgamation as a side issue to the name change and didn’t think there was an advantage to prolonging the matter further: “the government gave you an opportunity to settle the question among yourselves, but apparently it was not settled to meet your views. It has been said that the city council has lost the confidence of the people. If so, you will soon have the opportunity to turn them out.”

With about two months to go until the province went dry, the Ontario Liquor Licence Board sent all dentists, physicians, druggists, and veterinarian surgeons their prohibition blue books. The Telegraph article noted: “Hitherto a doctor could telephone a drugstore and tell the attendant to give a patient a certain amount of liquor. Sometimes the druggist was deceived by this method, and the practice must cease.”

Once prohibition was in force, doctors (etc) could prescribe six ounces (slightly more than 2/3 of a cup) for medicinal use, and one pint (just more than 2-¼ cups (assuming the Imperial pint)) for bathing the patient. Along with a copy of the Canada Temperance Act, the blue books included the appropriate forms needed to give patients medicinal alcohol.

How sweet it is: sugar beets for the refinery

The Dominion Sugar Company looked forward to processing a bumper crop of sugar beets, and a successful refining year.  It contracted 9000 acres from 1800 farmers, within a 100-mile (161 km) radius of Berlin. Even though the wet spring made about a quarter of the land untillable, the company expected September’s harvest to match 1915’s yield.Before the war, Dominion acquired seed from Germany, Holland, Russia, and (more recently) Italy. The shortage of ships’ bottoms meant further imports were unlikely until after the war, so  seed had to be developed in Ontario.  The company contracted acreage farms in Baden and New Hamburg for this.  They supplied more than the Berlin factory could handle, but still another 100 acres were planned for 1917.

According to The Telegraph, the Berlin factory’s 100-day production season would start on 1 October. It had a daily capacity of 700 tons (711 tonnes), and could produce roughly 600 barrels of sugar per day.  Management foresaw problems in securing the needed 300 men to run the works, because of the area’s general labour shortage. 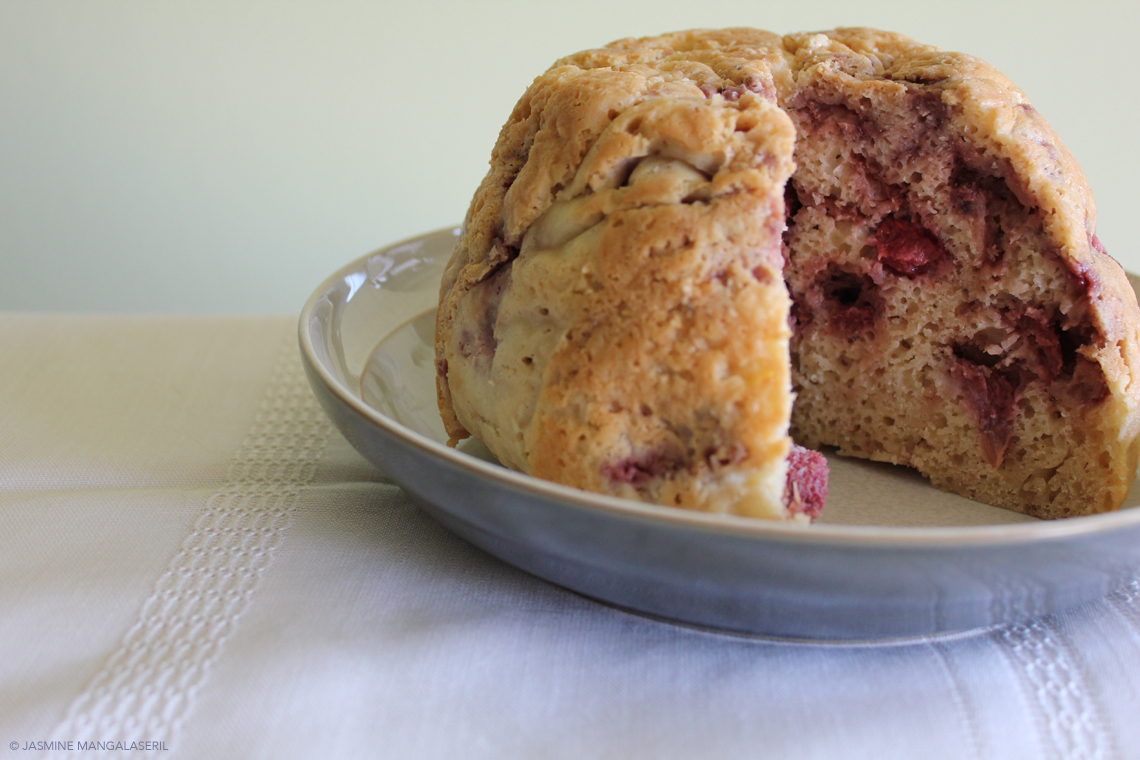 The weekly market reports mentioned an abundance of juicy strawberries. I’m willing to go on a limb and say people in 1916 eagerly awaited strawberry season as much as we do today.

I usually make steamed puddings in the autumn or winter, so it seemed a bit peculiar to set up my pot and butter my basin in July. I’m rather glad I did. It’s a simple recipe that produces a not-too-sweet berry-studded sponge. I didn’t make the strawberry sauce (I nibbled on so many berries before I made the pudding that I didn’t have enough left), but I have been eating it on its own or with ice cream.

Mix one cupful of sugar, two eggs, one teaspoonful of baking powder, two cups of flour, one cup of sweet milk, two cups of strawberries and steam two hours. Mash two additional cups of berries and three-quarters of a cup and serve with pudding.

Prepare your steamer and a 1.65L (7-cup) pudding basin as you usually would (see notes).

Beat together the sugar and eggs with salt. Incorporate the wet and dry ingredients into the egg mixture in alternating additions (dry-wet-dry-wet-dry), scraping down the bowl between additions. Fold in the strawberries.

Pour into the prepared basin, lid (or cover) it and steam for about 2.5 hours.

Serve, if you wish, with strawberries mashed with sugar, crème anglaise or ice cream.