The 118th get spots; Colonel Lochead gets spotted

Ten soldiers came down with measles and moved to hospital. The outbreak wasn’t serious, but if more men came down with spots, the Battalion could be quarantined.

A few days before Halloween, Huronto, The News Record’s source in the 118th Battalion, reported on Lt. Col. Lochead’s promotion to District Assistant Quartermaster General. The CO wouldn’t confirm or deny the promotion when The Daily Telegraph reached out for comment; he insisted his priority was to get the boys overseas. By the end of the week, Colonel Martin presided over the Battalion’s parades.

A couple of weeks earlier, officers from Ottawa’s Military Hospitals’ Commission visited Freeport Sanatorium. A shortage of Canadian facilities able to treat returning tubercular soldiers brought them here to assess whether or not Freeport could be commandeered. The delegation was suitably impressed but believed the sanatorium’s 20-patient capacity should be trebled, which would cost $20,000-$25,000 ($357,000-$446,000–see notes on conversion).

Kitchener City Council unanimously decided to place Freeport at the Commission’s disposal for one year (with an option to renew). Ottawa would cover the expansion and site renovation costs, including updating the plumbing, constructing an outside bath-house, and improving the laundry.

Alderman Gross tosses his hat into the ring

The Record ran a glowing editorial about Alderman Gross’ decision to run for mayor. The writer focussed on the fact that the politician was a self-made man who overcame great adversity to become a respected community and business leader:

It is related to that the spur, which pricked him on to make a man of himself was thoughtlessly applied by an end-man at a minstrel show in the town hall when a near relative was made the butt of a rude joke. Then and there he resolved to become a useful member of the community and to make the name he bore an honoured one.

Gross first joined city council in 1890. In the 1916 election, he earned the most votes, to which the editorial writer concluded, “…the reasons for the confidence our citizens’ repose in him, three points stand out prominently: his good sense, his courage, and the fact that he is a self-made man.”

Meanwhile, Ottawa launched a federal investigation into food’s rising costs. The Minister of Labour, TW Crothers, would look into allegations of wholesalers dictating retailer pricing. Producers sold a barrel of apples for 50¢ ($9.06), but that same barrel would later go for $3.50 ($63.39) or more. On the other hand, retailers blamed wholesalers for price increases. “Mr Crothers can earn the lasting gratitude of 99 per cent of Canadians by delving into this matter and uprooting it wherever it exists.”

“Fun, frolic and spookmen” set about on Halloween. Hundreds in “the most outlandish” costumes, including cowpunchers and clowns, roamed Kitchener’s streets. Some young girls went out dressed in their brothers’ clothing. Alas, the lasses made unconvincing lads as they were seen “stuffing their hands in the trouser pockets and strutting down the street in anything but a masculine step.” Newspaper readers were likely relieved to know “no one suffered the misfortune of arrest for overdoing the thing.”

That said, down King Street in Waterloo, reports of “Jack-the Peeper” made the rounds. The nosey Norbert was busy between the hours of 10pm and 11pm, spying on the town’s residents. A lady, who was about to retire for the night, “was startled to see the face of a man pressed closely against the pane…It is known that other residents have been similarly annoyed.”

The Daily Telegraph ran a story about “a study” of working women’s chances of getting married. While he did not see fit to offer an indication of sample size, methodology or location, he was kind enough to proffer his well-considered “analysis.”

It may be unsurprising to some he felt “the additional charm of a neat costume [uniform]” was key to a woman’s ability to land a man. What may be equally unsurprising was his low placement of educated and articulate women, as he placed teachers sixth on the list of seven. 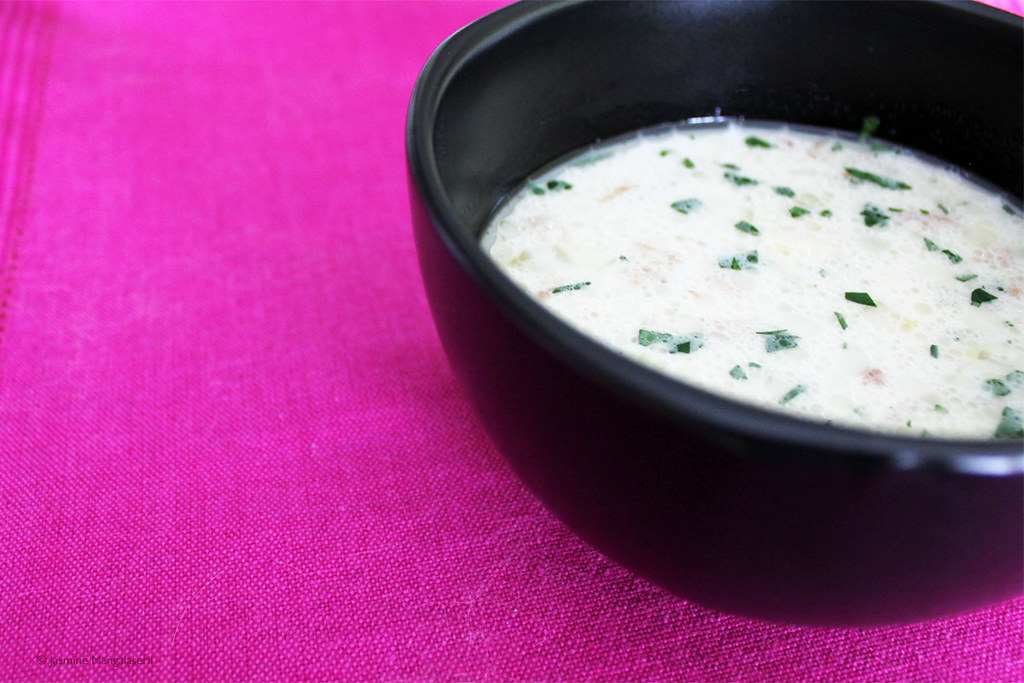 One thing that strikes me about the local period cookbooks is the number of pages devoted to fish and seafood—and very specifically, oysters. For the most part, many preparations are for broiled or baked fish, sometimes napped in a white sauce, but there are also a number of fritters and croquettes.

Given the cooler temperatures, I delved into the 1915 Toronto Cook Book’s “Fish and Clam Chowders” section for a New England Clam Chowder. The recipe itself isn’t very demanding, but I made it easier by using tinned clams, instead of fresh.

One-quarter pound fat salt pork, cut in little squares and fired; then take six potatoes, peel and cut in little dice-shaped pieces, two sliced onions; put potatoes nd onions into kettle with pork; add a little hot water and the liquor from one quart of clams; then separate bellies from clams and add them both to the other ingredients. Cook until potatoes are don; and pepper and salt to taste; when cooked, just before removing from fire, add one quart sweet milk and a few sprigs of parsley.

Fry the bacon until crisp. Add the onions and cook until a pale yellow—add butter, if needed. Stir in the potatoes, with the liquor from the clams and cover with water. Bring to the boil until the potatoes are cooked. Add the clams and milk and bring back to a boil. Season to taste. Add parsley before serving.