Happy New Year! On to business

Berliners welcomed 1916 with the usual democratic business: JE Hett was acclaimed for a second term as mayor and would preside over a 15-man council. Allegiances were known: roughly half the aldermen were with the Board of Trade and a quarter were aligned with the Labour and Trades Council.

I feel it important to note much of Berlin’s success as an industrial centre can be credited to the Board of Trade’s projects (obtaining a tram line, waterworks, sewage system, etc.). I think it equally important to note as the Board was busy with these infrastructure projects, it seemed to position its chess pieces to gather power. In 1914, the Board of Trade proposed petitioning Queen’s Park investigate five-member commissions run municipalities with populations greater than 10,000. Paid commissioners would be elected to two-year terms and appoint a business manager–similar to how water and light commissions were run. Their governance solution was a businessman’s way of running things–and one that didn’t require the “antiquated and wasteful” system that required voter approval.

While they selected their officials, Berlin’s electors also approved a by-law supporting radial development (high-speed inter-city electric trolleys). The radials were part of a state-of-the-art publicly-owned interurban network, proposed by the Power Minister, Adam Beck. The idea hit many of the right notes: because the Berlin (and Waterloo) would be a hub, local trade would increase, cost of living would decrease, more farmers would come to market, and rail travel would be more affordable. The interchange’s steam rail connection and new access to Toronto’s waterfront were sure to attract new business. It’s not terribly surprising Berlin passed the bylaw—apart from Beck being a local boy (the Power Minister was born in Baden, Ontario), in 1910, Berlin became Ontario’s first municipality to get hydroelectric power by long-distance transmission lines from Niagara Falls.

The war was almost 17 months old and despatches peppered the newspaper’s pages with stories about troop engagements and attacked ships. Back home, friends and families would have been relieved to read reports about Canadian troops passing a quiet Christmas in good spirits, and some Berliners would be equally relieved to read the same of the German soldiers.

The Berlin News-Record’s front page on 06 January carried news of the city’s first war casualty. Some two weeks before, 28-year-old John “Jack” Gerbig died on the Western Front’s front line. Gerbig was an Eby and great-great-grandson of Berlin’s pacifist founder.

The 118th Battalion’s local recruitment campaign was underway, its activities and achievements proffered as great progress for King and country. Encouraging prospects for “continued” recruiting success was bolstered by the fact one young man signed up on New Year’s Eve. The paper was also sure to mention “one or two more would follow,” and “several more men have signified their intention to don the khaki within a few days.” 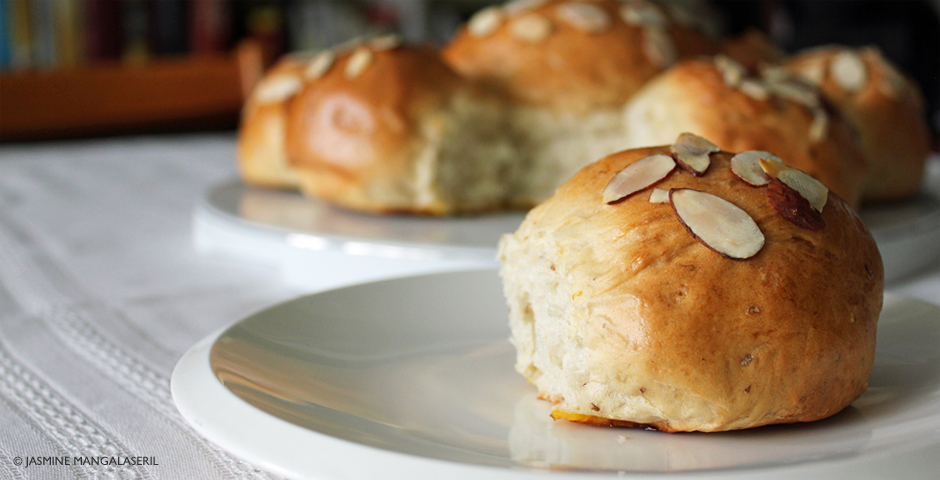 It’s the beginning of the calendar year, but also the end of the Christmas season. I’m not entirely sure how many Berliners partook in Epiphany or Twelfth Night celebrations (knowing that the late Queen had banned them for being unChristian and unamusingly improper), but given St. Paul’s English-language services made front-page news, any qualms I originally had about offering a dreikönigskuchen recipe have been assuaged.  That said I am more than sheepish that the first recipe of this project isn’t a period one, but there you go.

Dreikönigskuchen (Three Kings Cake) is a flower-shaped German sweetened yeast-leavened cake, flavoured with lemon zest. It’s essentially a tear-and-share sweet bun, flecked with flaked almonds or crunchy sugar. A neatly hidden almond promises its discoverer the prize of being declared king or queen for the day. Who knew the road to a regal life lay in such delicious ways?

Rub the lemon zest into the sugar and salt and set aside for a few minutes.

Cream together the butter with the infused sugar mixture. Rub the flour into the butter until the mixture resembles coarse meal. Mix in raisins so they are evenly dispersed, and do the same with the yeast. Pour in the milk and knead for about 10 minutes—add extra milk or flour, as needed, so the dough is soft and just slightly sticky.

Plop the dough into a buttered bowl, cover, and set in a draft-free corner of your kitchen until its volume has doubled.

Once it has doubled, punch the dough down and knead it lightly. Break off eight pieces, each the size of a small Persian lime (80g). Roll into balls, being sure to tuck the almond into one of the balls. Form the remaining dough into a ball.

Make an egg wash by mixing the egg yolk with a tablespoon of water. Brush the buns with the egg wash, and sprinkle the tops with the pearl sugar or flaked almonds.

Bake for 30-35 minutes or until the buns are burnished. Remove from oven and cool on a wire rack.