A week after city council’s wrathy meeting, the head of the military district announced troops would not winter in Kitchener.

As expected, locals weren’t pleased. News of North Waterloo’s 118th and Muskoka’s 122nd “homelessness” revived speculation (mostly in The Daily Telegraph) of the boys’ return home. The newspaper tried to bolster its theory and connect a  unrelated thread and reported North Waterloo’s MP met some governmental movers and shakers (for undisclosed reasons).

Colonel Lochead didn’t want to return unless the Queen Street barracks was ready. Which it wasn’t. “A great deal of natural anxiety was manifested by all ranks over the next move” as they “marked time” until the next move.

The News-Record steadfastly reported the Battalion would return to Carling Heights. Which they did. When its contemporary could no longer continue its campaign, it admitted the boys would go to London, and included a subhead that read “KITCHENER LEFT OUT.”  Readers may have been reassured The Daily Telegraph continued to print “reliable information,” as it returned to informing citizens the boys would go overseas “very soon.”

Another of the boys’ “pranks”

The boys’ train trip to London wasn’t supposed to stop in Kitchener, but soldiers fixed that. They uncoupled the airbrakes between two carriages, as the train passed under the Margaret Avenue bridge. Because of this, the train made an unscheduled 30-minute stop at Kitchener.  Somme of the khaki-clade took the opportunity to  pelt Mayor Hett with sugar beets (which the train also transported).

And they took the handcuffs with them

According to Reeve Meyer of Elmira, parts of Waterloo County were “dead” to the constabulary. “Numerous appointments have been made where appointees have received badges, handcuffs and other accessories at the County’s expense and have never acted…” Some of these people left the County and took their policely equipment with them.

North Dumfries’ Reeve Bricker took issue with painting the entire County with a brush clearly more appropriate for other areas: “We have such good people [in North Dumfries] that it is not necessary for them [the constabulary] to do much.”

Squeezing the householder between the upper and nether millstone

The previous week, the Dominion Trades Council asked Acting Premier Robert Rogers for a federal investigation into skyrocketing prices. The public understood the war put a higher demand on food but the problem was “seeing conscienless [sic] groups of men take advantage of the situation in order to enrich themselves quickly.”

The Minister approved a scheme to control food prices that was similar to what was in place to regulate munitions profits. If mills set unfair pricing on “food materials,” the government could step in and restrict profits. The feds could also dissolve combinations and cartels.

Frothing over because of the milk by-law

Just as in 1915,  city council stalled passing the milk by-law and returned several clauses “for more consideration” to the Board of Health

Aldermen Cleghorn,  Rudell, Zettel, Cleghorn, and Reid had problems with a clause that required grocers to sell milk in bottles. These aldermen “thought that with proper care it would be just as safe to buy milk from the grocer as it would be to buy it in some of the bottles that are being handled.” (see notes)

Aldermen Huenergard (a doctor) and Gallagher reminded the others that bottling milk was one of the bylaw’s main reasons. Alderman Hallman “would sooner buy in bulk from some of the retailers whose surroundings he knew were sanitary, than buy milk in some bottles…” Reid said he thought milk sold “loose” was more sanitary than bottled.

As they discussed milk hygiene and safety, it seems as if Cleghorn and his crew may have favoured a two-tier system where some vendors would bottle and sterilise milk and others would continue current practice.

The obstructive aldermen also had a problem with a clause that regulated feed. The Board of Health advocated the “prohibition of feeding fermented products” to dairy cows. This would include organic waste products (“offal”) from the sugar factory and breweries.

All they wanted to do was wet the baby’s head

Less than a month after the Temperance Act was put into force, Paul Pharot stood before Magistrate Weir. The defendant ordered “a quantity of whisky” and a few kegs from Montreal for a christening. Things got out of hand at the celebration, and two of his guests got into a fight. Someone called the police.

Weir took the opportunity to educate the assembled about the Act. While private residences could keep liquor, any place with three or more lodgers wasn’t a private residence. Since Pharot had four boarders, he was found guilty and fined $200 (almost $3800 – see notes on conversion). “The Magistrate also dwelt upon the seriousness of the offense and emphasised that the Ontario Temperance [Act] is not to be trifled with.”

Anyone who hoped to purchase a pre-soused pud for Christmas would be sorely out of luck, thanks to the Temperance Act. Professional bakers weren’t allowed to spike their mincemeat pies, plum puddings or other normally tippled treats. “Likewise, the young folk with a sweet tooth have bidden a last farewell to ‘brandy balls’ and other candies flavoured with alcoholic stimulant.”

It was an offense for bakers to take liquor from home to work. In cases where he lived above the bakery, liquor couldn’t cross the business’ threshold, and must be kept “entirely shut off from the shop.”

The home baker, on the other hand, could be as benevolent with brandy (or what have you), as she wished.

Some milk producers kept their cattle in filthy, overcrowded conditions, and fed them industrial by-products (100 years ago, it sounds as if this included brewing, distilling, and sugar refining waste). An 1858 exposé of New York City-area distillery-dairies and their “swill milk” found cows eating boiled distillery waste, which often left them ill rotted their teeth.

Milk was often contaminated with microbes that could cause typhoid, E. coli, Listeriosis, and tuberculosis, as well as dirt and whatever else fell in at the shed or in transport.

Some unscrupulous dealers (including one in Waterloo)  “skimmed” milk (thinned with water). Others adulterated their product by adding salicylic acid, boracic acid, chalk and/or colourants made it more attractive and hid spoilage.

Dealers then poured this (unsterilised) milk into whatever containers customers had. If the dealer sold it to a shop, the milk would be poured/ladled into other vessels for the shopkeeper’s clientele.

In 1916, newspapers published “milk test” results for dairies, grocers and private individuals. With only a name and number printed, I don’t know if the number referred to a milk fat percentage or an impurity scale or something else. 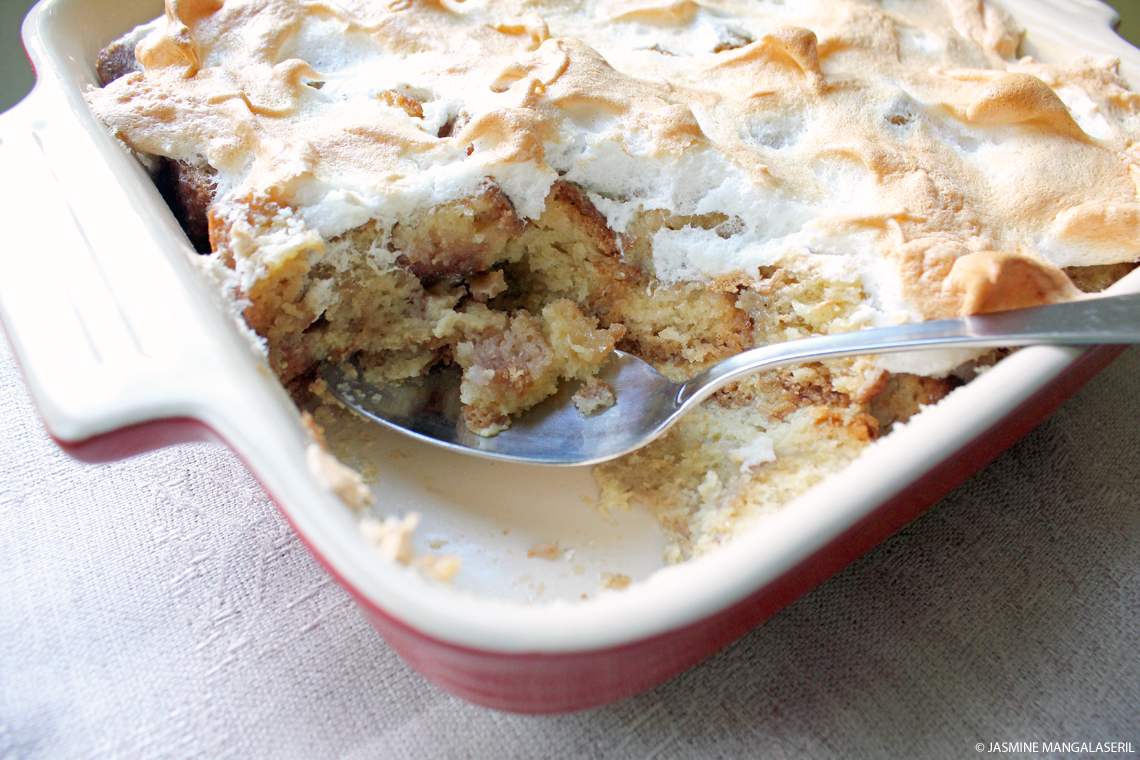 I’m not sure whether to call a Tipsy Parson Pudding a Trifle or of a Queen of Puddings variant. Trifles are sherry-soaked cakes covered in custard and often topped with whipped cream. Queen of puddings are custardy breadcrumbs topped with jam and meringue. All the trifles I know are made with cooked ingredients (and don’t need added oven time), while Queen of Puddings are baked.

This version falls between the two: jammy soused cake tumbled in custard, topped with meringue and then baked. It’s an easy dessert that uses up stale cake (for those who allow their cake to get old), and can be made a bit fancier by piping the meringue and sprinkling the top with caster/castor sugar before baking.

Cut any pieces of stale cake into thin slices and cover with any cake of jam arranged in a pudding dish. Make a custard by stirring one teaspoonful of corn starch wet with a cup and a half milk, allow it to cook a few minutes, then stir in the yelks of two eggs beaten in two tablespoonsfuls sugar. Remove from fire and flavour to taste with vanilla. Pour over the cake. Make a meringue of whites of eggs and a little sugar, spread over the top and brown lightly in the oven. When liked, flavour with wine.

Spread a scant amount of jam on one side of each of the cake slices. Cut into cubes and put into a bowl. Sprinkle sherry overtop.

Make a stiff meringue with the egg whites, cream of tartar and 25g (2 Tablespoons) of sugar. Set aside.

Make a custard by mixing the cornstarch into the milk. Scald the mixture and take off the heat.   Whisk the remaining sugar into the eggs and temper with the hot cream. Stir well and when fully incorporated, return to the pot and add the vanilla. Stir over medium-low heat until the custard coats the back of a spoon.

Pour the custard over the cake pieces and stir to coat. Tumble into the prepared baking dish. Spread the top with the meringue, being sure to spread the whites to the edges. Schwoop as desired.