The week before Thanksgiving, locals enjoyed downright balmy weather.  The mercury rose to the 80s F (mid-20s C to low 30s C), but all that changed the day before Thanksgiving. At 3 pm on Sunday, temperatures hovered at 88F (31C) but dropped to 35F (2C) by Tuesday at 4:30 am. I couldn’t find Kitchener’s Thanksgiving Day high, but Toronto felt the same drop and huddled for warmth in 51F (11C) temperatures.

It made for a chilly walk to Thanksgiving services. Families likely heard sermons that touched on an assured war victory, duty to others or (in certain pulpits) Temperance’s victory. I doubt if the chillier temperatures put a damper on the Thanksgiving Day family walk. Kitchenerites were a rather sturdy lot. All they needed to do was to put on a sweater before they tramped through the woods or headed out to find out who won World Series’ Game 2 (Boston Red Sox over the Brooklyn Robins (in 14 innings), 2-1).

…if you could find a turkey

Housewives on the hunt for a bird to bronze may have been disappointed with the lack of gobblers on offer. Few turkeys appeared at the farmers’ market.  Those available went for 30¢ ($5.68) per pound. (My guess is since the summer drought hurt both grain and local harvests, poultry/turkey feed prices cost more than in previous years. If procuring feed was an issue, preparing the birds for the big day could have been more difficult.  This may have made turkey another of 1916’s “bad harvests.”)

Canada has a bit of a long and twisty history with Thanksgiving. Indigenous Peoples, Frobisher, and l’Ordre de Bon Temps all gave thanks long before the Pilgrims sat down in 1621.  However, as a country, we didn’t officially have national annual celebrations until 1879. Before then, it seems to have been noted via haphazard civic observances. A moveable feast, it skipped through the calendar, based on the reason.  Some were for British war victories, surviving a disaster, and Queen Victoria’s golden jubilee.  Giving thanks for “God’s mercies” was often cited. In the dozen years before 1916, it moved about from mid-October to mid-November.  Thanksgiving’s permanent day (2nd Monday in October) was set in 1957, but it fell on that date in 1914, 1915 and again in 1916.

This doesn’t mean Canadians didn’t have harvest celebrations. They did, and their feasting may have been shaped in part by American Thanksgiving traditions brought with the Loyalists.

Then, in the mid-19th Century, two cultural developments occurred that likely grew Thanksgiving’s popularity in Canada. US publications touting the Pilgrims’ first Thanksgiving as “the first Thanksgiving” circulated in Upper and Lower Canada. A couple of decades would pass before US lawmakers named It a national holiday. The northeast and midwest states already celebrated Thanksgiving and set what we know as the traditional menu: stuffed roast turkey, cranberry sauce, and mashed potatoes, along with mince, apple, and pumpkin pies. The other development was the revival of British Harvest Home celebrations.  It incorporated some ancient British traditions, but usually included a harvest procession, music, and a harvest tea or supper. By 1892, a Saturday Night writer reminisced about childhood memories of Thanksgiving “feasts that included turkey, stuffing, and pudding.”

In 1916, little seems to have changed from that canonised 1840s Thanksgiving menu.  Even though it was wartime—with all that entailed—housewives likely worked towards those those ideal dishes. Since German bombing campaigns destroyed cargo-laidened ships, the “scarcity of bottoms” limited imports, and government buy local campaigns, the clever cook likely had to compensate to accommodate as best as she could.

Much like today, hero foods—such as turkey and pumpkin pie—were accompanied by whatever the purse would bear: simple and affordable sides or elaborate and expensive accoutrements. Other meats may have appeared with the bird—100 years earlier, it would have been game, but it was likely a fish course could have been prepared.  An alternative could have been ham (a dozen years later, a Chatelaine article mentions ham could be served along with or instead of turkey) but given export quotas to Britain, I’m not sure how much ham could have been availably locally–even with Schneider’s on Courtland Avenue. Steamed puddings were the traditional after-dinner sweet (fruit, pumpkin or mince pies were just as popular). Since the noon meal was the main repast, Thanksgiving Dinner took place at, erm, dinner—a light supper would have been served later in the day.

Annie Gregory lists Thanksgiving Day menus in Canada’s Favorite Cookbook (1902), which suggests what should be served at breakfast, dinner (lunch), and supper. Here’s her dinner menu:

Out in Winnipeg, Eaton’s The Grill Room offered two options in 1916.

Thanksgiving in Kitchener in 1916

The 1898 New Galt Cook Book, 1906 Berlin Cook Book, and 1915 Toronto Cook Book don’t offer Thanksgiving menus (but Galt‘s Christmas menu could be adapted). That said, period housewives looking for what to serve could find recipes for the turkey feast.

Given skyrocketing food costs, and crop and turkey issues, it’s reasonable to assume home cooks back then would have ade do with what they could find (just as we do today):

As with today, people will incorporate their favourite recipes from home in their celebratory meals. With a large German population, some locals may have had roast goose, Beschwipste Plfaume (braised spiced plums), red cabbage or Rouladen.  Some may have served  squash pie flavoured with mace instead of plum pudding or pumpkin pie. 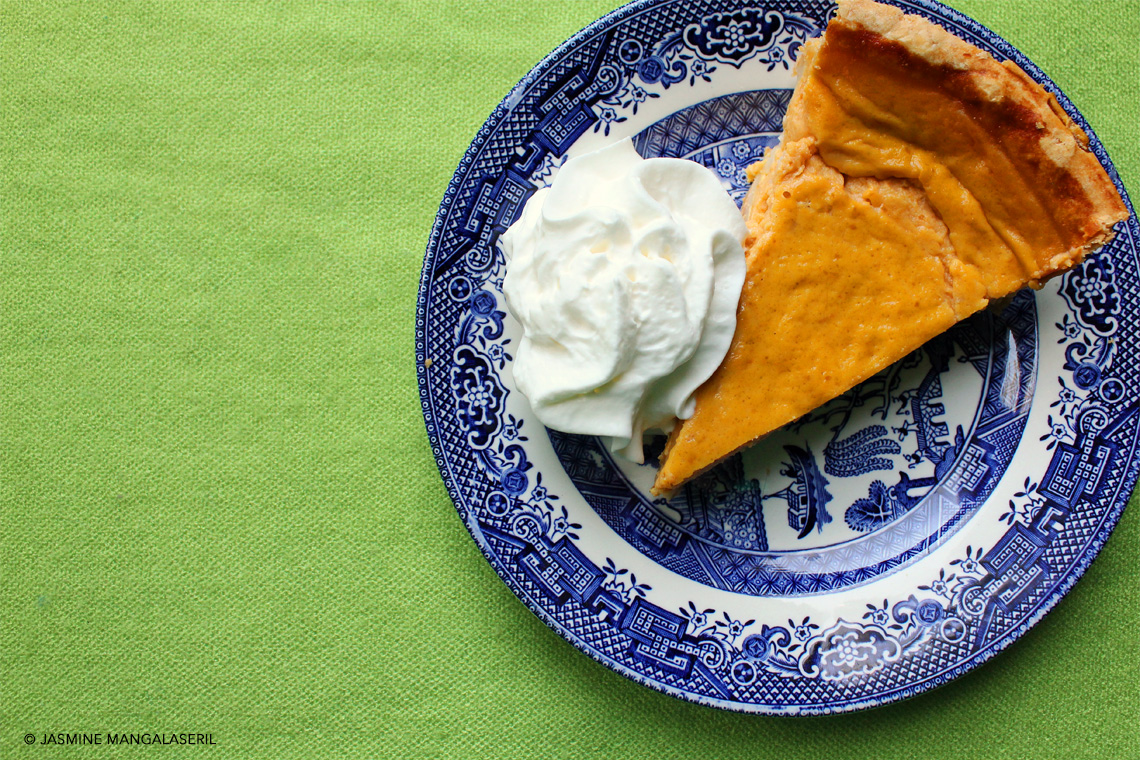 In honour of the big day, I settled on a pumpkin pie. Back then, getting a pumpkin and stewing it as a first step would have happened in a number of kitchens (as would making the pastry by hand), but today, we’ve cans of pumpkin and boxes of ready-frozen pastry shells. The pie is quite creamy—almost like a lightly-spiced, silky pumpkin custard. After my first bite, I thought of remaking it as a crème caramel. I still might.

Stew the pumpkin till tender, rub it through a colander. To 1 pint of the pumpkin, add 3 eggs, 1 quart of milk, 1 teacup sugar, ½ teaspoon salt and ginger, this will make two large pies.

If you’re using canned purée, cook it for a few minutes, to get rid of the tinny taste. Let cool.

Beat together the eggs and sugar, then add the milk and spices. Blend in the pumpkin.

Pour into the pastry shell—do not overfill.