Military doctors declared another 23 of the 118th Battalion medically unfit.  With these men gone, the Battalion’s numbers dropped to about 650, or roughly two-thirds of how many were needed to be kept an independent unit. Those who remained continued to perform their drills, learn trench warfare, and get various tastes of combat life, while they grew increasingly impatient for overseas orders.

On 7 September, thousands waited at the GTR station for the soldiers to return home, with “many fair ladies” were scattered amongst the family, friends and general onlookers to welcome the Battalion. Rumours flitted about town that this would be their last leave prior to shipping out (mind you, other rumours insisted they wouldn’t go overseas until Spring). The crowd let out “tremendous and prolonged cheers” when they arrived after their six-hour journey.   Several bands—regimental, cadet and Boy Scout—played a jubilant welcome.

As soon as they stepped off the carriage, the soldiers wanted to make a “bee-line for their homes to get ‘some eats’” but Colonel Lochead gave the order to fall in. They lined up and marched to Market Square.

The newspapers paint a semi-chaotic scene at City Hall. With only PC Blevins to control “the immense throng” of onlookers, the soldiers were forced to lined up on the street because the cheering crowd crowded the space in front of City Hall. Mayor Hett’s terrible cold forced a short ceremony; he and Lochead delivered a few words before the assembled sang God Save The King to end the ceremony.

Presenting of the colours

On 11 September, 15,000 people took advantage of the half-day holiday and lined the streets and crammed Victoria Park to watch the 118th receive its colours. The soldiers arrived at the park in a parade that featured several bands and “hundreds of automobiles.” The Telegraph’s writer seemed quite moved by the event: “Every man marched with a verve and energy that bespoke the spirit with which the heroes of North Waterloo will uphold the traditions of the county on the firing line.” It was “one of the most inspiring witnessed in this city in many years.”

After Lieutenant-Colonel Shannon, OC, 1st Division inspected the 118th, the boys made an altar of their drums, on which the veiled colours were placed. The flags were unveiled after a consecration ceremony.

The Imperial Order of the Daughters of the Empire’s (IODE’s) Queen Anne Chapter donated two blue silk flags to the Battalion. Each featured a small Union Jack in the upper left corner, a maple leave “embroidered in natural colours” in the centre, and King George V’s imperial crown. The Battalion’s motto, Bellum Pro Pace, was embroidered in red and gold and set at the bottom of the flag.

After various speeches, and a march past (“the most inspiring spectacle of the programme”), the IODE’s Princess of Wales branch presented gift boxes of useful items to the soldiers. Before the soldiers marched off to the recruitment office to perform a short drill, the bands performed O Canada.

Nothing is sadder than a childless mother

While parents had a hard time sending off their boys to fight for King and Country, families had an equally fierce battle to keep their girls at home. According to The Telegraph, “a home without a mother is a sad place indeed, but a mother in a home without her children about here, until they are settled in homes of their own, is a tragic creature.” Parents seemed perplexed that young folks wanted to work outside the home, or “seemingly for the sake of being away.” Often mothers who whined about their children (when they were little and at home) would complain that their ducklings wandered off when their help was needed. The author maintained the mother’s role was to nurture an “understanding companionship” with her daughter, so it becomes “a useful outcome of the girl’s life.”

Give girls a challenge—but not too much of one

Meanwhile, another article (in the same edition, on the same page) recommended to keep girls interested in staying at home, mothers enlist their daughters’ problem-solving abilities. “Let them demonstrate a new method for handling these puzzles [issues of economy and efficiency] once in a while and your home will seem to be their home, too.” Thoughtless parents burden daughters with heavy work. It is because of them, these girls “enter womanhood with a dislike for housework…everything connected with the house suddenly becomes distasteful to them.” These little innovations in domestic psychology were bound to keep daughters from abandoning mums for the canning factory or the department store.

And yet another article (in the same edition, on the same page) mentioned how hired farmboys now work from 8 am to 4 pm “and demand their Saturday half-holiday.” Almost everywhere, sewing girls, clerks and waitresses have a 54-hour weekly work limit. “What a pity this revolution of the working day has not yet struck the home where mother and the girls work from daylight until too tired to work longer.” 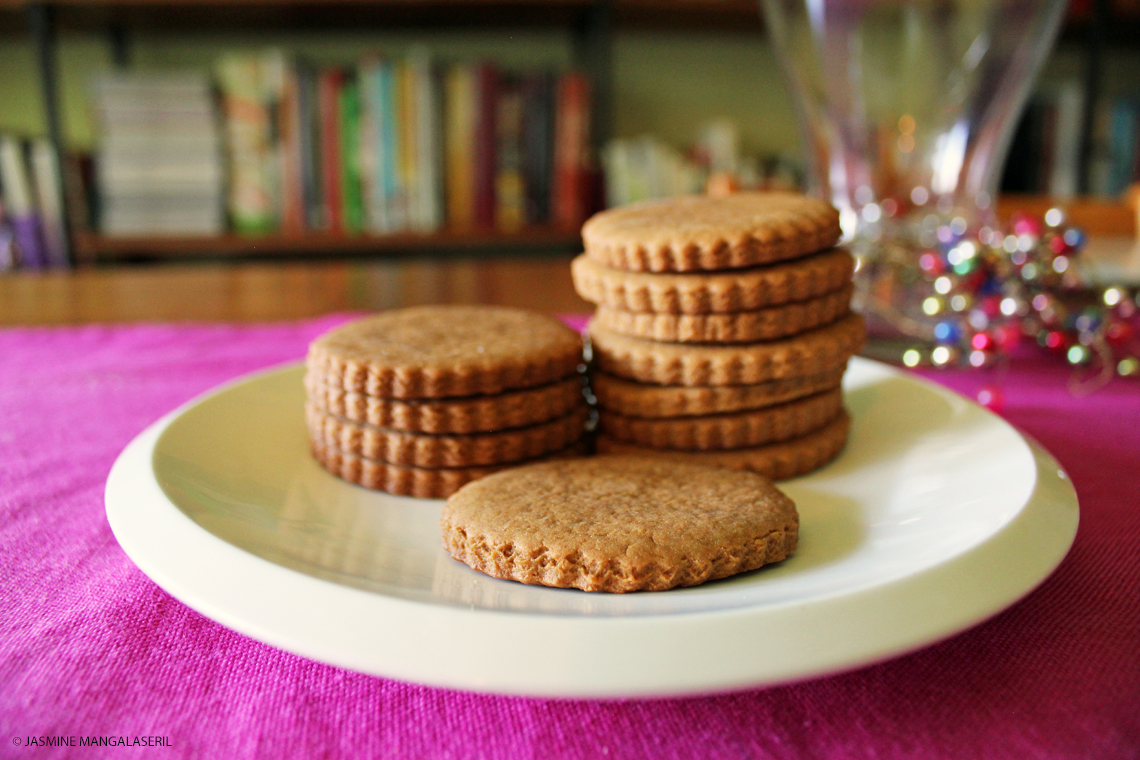 These are molasses spice cookies—not really ginger snaps, but when cooled they can be rather…snappy.

The original recipe was a bit of a conundrum, if only for the “large cups” of flour. To be on the safe side, I halved the remaining ingredients and kept track of the flour used—a good thing, as it seems the “large cups” were about a pint eat.  The half-recipe produced more than four dozen tasty cookies. I’ve increased the spicing—nothing wrong with a little extra black pepper and ginger, but you can reduce the ginger to 1-½ teaspoons and the pepper to 1/8 teaspoon (or a pinch) if you really want to.

Take the sugar, molasses, shortening, ginger, black pepper, the soda in the boiling water. Mix with flour enough to roll out. Roll thin, cut into cookies and bake in greased tins in a moderate oven. Cheap and good.

Mix together the sugar and molasses, then cream in the shortening. Beat in the spices and salt.

Dissolve the soda in the boiling water and pour into the spiced molasses mixture. Blend well.

Beat in the flour about a cup at a time, until the dough is no longer sticky and can be easily rolled.

Wrap in plastic and chill for 30 minutes.

Roll the dough to about 2mm thickness (or less) on a lightly floured board. Cut with a sharp knife or a 5cm (2-inch) cutter and place on the prepared baking sheets.

Bake for 12-15 minutes, or until the edges and bottoms have darkened.  Cool on wire racks.