The city bell rang for 10 minutes when the post office’s clock struck midnight on 1 September 1916. This was the extent of the public celebration that marked Berlin’s passing and Kitchener’s arrival.

“Greetings to the citizens of Kitchener”

Union Jacks encircled The Daily Telegraph’s banner greeting on 1 September. Approximately half of its front page’s real estate was devoted to the name change: the postmaster general’s proclamation, the ringing of the city bell, the city’s history, and even a prominent story about Alderman Hahn’s birthday.

In the midst of their celebrations, the paper’s editors seized the opportunity to puff their feathers and preen their efforts as diligent and accurate:

The Telegraph, as usual, was the first to give this official information [the postmaster general’s proclamation] publicity by means of a bulletin on the window and the news that the Post Office Department had authorised the change spread rapidly throughout the city with great rapidity.

This information came as a surprise to a goodly number who were led astray by a rumour circulated by a local newspaper that the postmaster general would not sanction the change of the Berlin Post Office. There was general satisfaction expressed by citizens that the matter was finally settled.

At noon Mayor Hett read the proclamation to an assembled crowd on city hall’s steps. It was the customary thing to do whenever a village, town or city changed its name. Three cheers were given for the new name and  “three rousing cheers” for the Allies. God Save the King ended the ceremony.

Meanwhile, almost all of The News-Record’s front page on 1 September concerned itself with a myriad of other events and issues: the revolution in Greek Macedonia, the looming railwaymen strike in the US, and the theatre of war in Balkans. Locally, the big story detailed t the minutiae of resolutions adopted by the Municipal Association (“…That Section 118 be amended by striking out the word ‘DURING’ in the first and fifteenth lines and adding the first and adding the word ‘IN’ in lieu thereof…”).

As to the ringing of the city bell, the paper noted it “was a matter of surprise in view of the fact that the city council had decided not to hold any demonstration but to adopt the new name in silence. The mayor, when asked about the matter, said: “The orders to toll the bell were not given by me but by Chairman Hahn of the Fire and Light Committee, according to the information I received.”

A shot across the moveable type case

The day after the name change, The Telegraph stepped up its battle against The News-Record. The two newspapers took opposing sides in the name change battle, with the former siding with the name changers and the latter sympathetic to the old name or (if that was not possible) taking on neighbouring Waterloo’s name through amalgamation.

The Telegraph highlighted inflammatory statements in its competitor’s 1 September editorial about the city’s new name: the “coercive methods” used to carry out the bylaw; the possible role the courts could play in reviewing voting procedures; the small number of votes that brought in Kitchener. Editors found this a particularly bothersome line: “before peace and unity can be restored, the name matter will require to be re-submitted to a vote of the electors” and a council that will “implement [voters’] desires” would need to be selected in January’s elections.

The Telegraph declared the words “venomous” and betrayed a “Dr Jekyll and Mr Hyde character” in the other newspaper—The News-Record’s 20 May editorial took on a “forgive and forget” attitude, while later on the paper seemed to challenge the outcomes (and gave voice to the anti-name changers). More to the point, The N-R’s writers and editors attempted to “discredit the large element of our population favouring the change of name.” The Telegraph called out its competitor on truthfulness, patriotism and loyalty, and accused it of stirring up “dissension within and distrust without the city.”

The News-Record’s rebuttal drew upon points that didn’t appear in its competitor’s pages. These included threats of raids or property destruction to those who didn’t side with the name changers; the police urged some opposed to a renaming to leave the city temporarily. Those who wanted to keep the old name weren’t allowed to organise “their forces and convey voters to the polls,” and no one wanted to scrutineer the vote because they feared reprisals.

The News-Record then challenged The Telegraph’s concept of disloyalty. After all, Thomas Adams, the Canadian Commission of Conservation’s planning adviser, made his views known on Kitchener as a possible new name. He thought it “would be unfortunate. Lord Kitchener’s name is Imperial rather than local in its significance.” 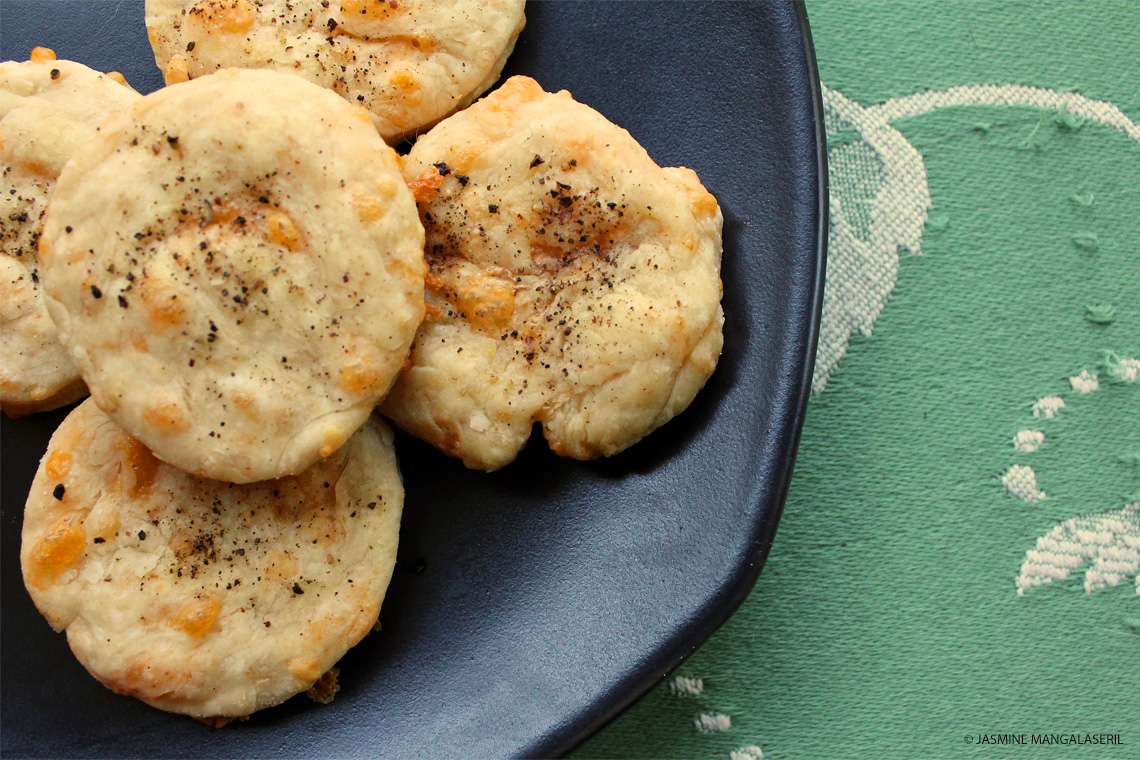 Cheese wafers are a quick and easy bake to go alongside soup or salad, or even a snack. My downfall was not taking my cue from the word “wafer,” because my wafers were too thick. I think they need to be thinner than pie pastry, otherwise they risk being done on the outside and underdone on the inside. Anyone who has had undercooked pie crust knows what this could be like.

Rolling issues aside, these little wafers can be made with your favourite hard cheese—Parmesan, cumin’d Gouda, Emmental (etc.). Be forewarned. Once you get the baking time right, they can be quite addictive.

Mix and sift flour, salt, and paprika; rub in shortening with finger tips; add cheese and mix to a stiff paste with cold water; roll out very thin, cut with a small round cutter, place on a greased baking sheet, and bake in a moderate oven five or six minutes. Serve with salad or soup.

Mix and sift flour, salt, and paprika. Quickly rub in shortening with fingertips until it’s like fine sand. Mix in the cheese. Dribble in water until you have a workable dough.

Lightly flour your board and roll out the dough until it’s thin (2mm-ish) – see notes. Cut with 5cm/2” cutter.

Transfer to baking sheets. If you wish, brush the tops with butter or olive oil and sprinkle with pepper.

Bake until the bottoms are browned—keep an eye on them, but 10-ish minutes. Cool on a rack.