One could easily imagine the name changers stamping their feet and stirring the air with pointed fingers, as they tried to rile local Britishers. Why hasn’t the name changed yet? How could the important and patriotic city of Berlin be subjected to such indifference? Who was to blame?  The Berlin Daily Telegraph’s doggedly pursued their cause célèbre.   Their “investigative” report ferreted out a Catch-22: the Post Office wanted provincial legislation to support the change; Queen’s Park wanted the Postmaster’s stamp of approval.

Since one Kitchener already existed in the Dominion (a dot of a community in British Columbia’s Kootenay District), the postmaster general wasn’t keen on approving another. To counter this, The Telegraph printed a partial list of Canada’s duplicate community names. It included four Almas, two Bridgeports, and three Cambridges. It didn’t help matters when the posties allowed Kaiser (Saskatchewan) renamed to Peebles. “The question arises, if the Post Office Department could make the change in connection with Kaiser, which is only a small village, why cannot the Department make a similar change when it was so voted by the electors of Berlin?”

At Queen’s Park, the matter was still live and appeared on the 15 August agenda.  To the frustration of some in Berlin, other issues tied up the legislators, and they the name change to the next meeting (a couple of weeks away). Hearing this, a “very indignant deputation” from Berlin travelled to Toronto to force the government into an order-in-council. Perhaps they would have had better luck if the Attorney General were around.

The Empire still needs you

On 10 August, conscription hit Britain. This meant automatic military enrolment for every eligible man (between the ages of 18 and 41). If they didn’t report, risked arrest and prosecution as a deserter.

Meanwhile, Canadian military leaders reduced the number of men in its battalions from 1148 to 1072 and addressed regional recruitment. A new order-in-council created regional recruiting directors to supervise volunteer sign-ups. They needed a better handle on the local economy and were encouraged to visit local businesses. By doing so, a decision could be made—with the local battalion’s CO—if a volunteer should stay and serve the state or head off for training. The order-in-council also allowed three types of badges or buttons issued to those permitted to stay behind: one for honourable discharges, one for those rejected from service, and one for those in an essential service.

The “exodus of cooking stoves and ranges” to summer kitchens should have taken place weeks earlier, but an article reminded readers of the fire hazards in their side yards. Summer kitchen were outbuildings—often a frame lean-to—where meals could be prepared without heating the main house. Their construction and fittings led to being firetraps.  Many had unprotected wooden finishes, no metal sheeting on the floor to catch errant lit coals, and the lack of proper ventilation or chimneys. Some readers may have shivered when they read the words, “insurance companies will not knowingly accept as a risk any buildings in which stovepipes issued through the roof or sidewalls.”

This week, JM Schneider & Sons announced the end of their two-year, $20,000 renovation and expansion project (almost $400,000 – see note on conversion). The endeavour added more than 10,000 square feet of floor space and upgraded the abattoir, curing, and packing areas. The Courtland Avenue facility was “one of the most up-to-date meat curing plants in Canada.”

“One thing that favourably impresses the visitor at once is the scrupulous cleanliness and sweetness of the place.” Doors and windows were screened to keep the flies out. “Lavatory conveniences” allowed every workman to “keep his person clean.” After his shift, every worker could take a dip into a 10’ x 16’ (3m x 4.9m) cement swimming pool filled with 60°F (15.5°C) running water.

The electrically-cooled cold storage section was a constant 35°F (1.7°C). In addition to keeping Schneider’s products, the company also kept other merchants’ perishables. The facility’s implied value rest in an anecdote: the previous week’s power cut didn’t impact the $2000 ($39,000) worth of products in the cooler.

Schneider’s slaughtered approximately 15-20 head of beef cattle and 200 hogs weekly. All the animals came from local farmers—the company paid almost $250,000 ($4.9MM) annually to purchase stock. “In this connection, it is of interest to note that when Mr Schneider began his business [in 1886], the price for dressed pork was five to six cents per pound [$2.15/kg] whereas today 15 to 16 cents is the ruling figure [$61.33/kg (approximately)].” Every week, Schneider’s averaged 21,000 lbs (more than 9500 kg) in sausage, “with hams, bacon and beef products proportionally.” Business was booming: output for the previous six months increased by 68 per cent over the same period in 1915. 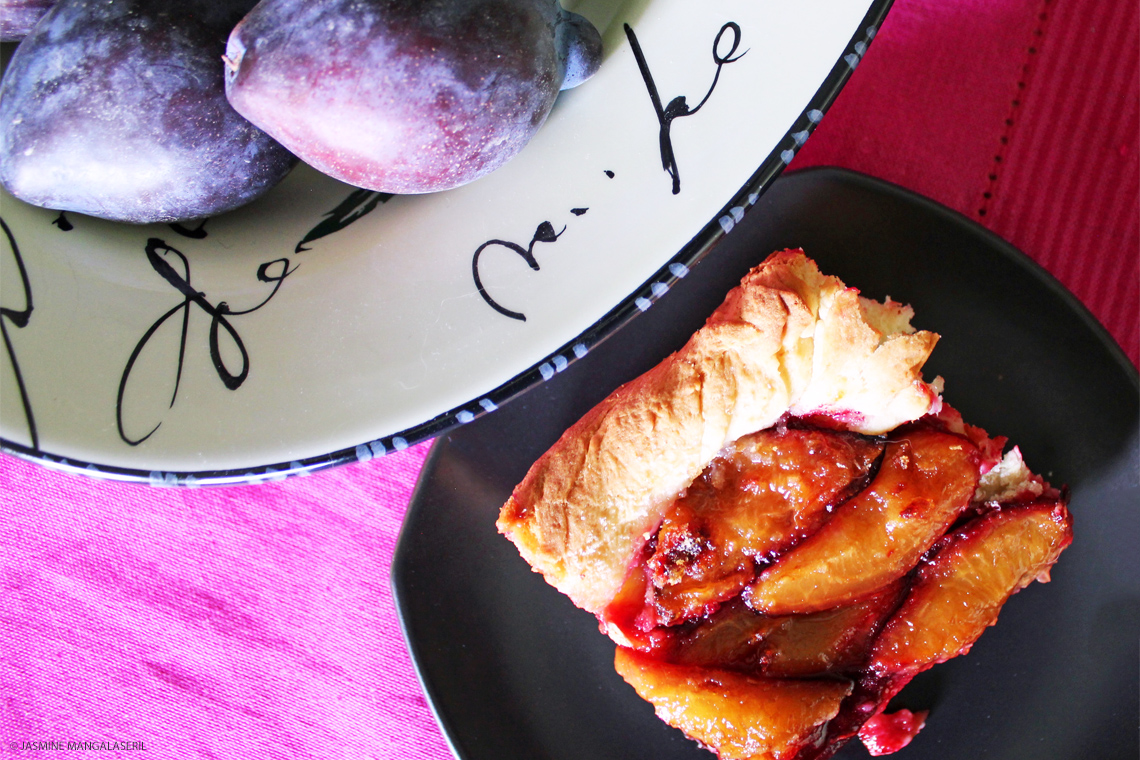 This week’s recipe appears because of an article about four plum-stealing Toronto youths. It seemed three of the boys (aged 14-17) thought their homes to be little more than prisons.  They set off to make their fortunes as farm labourers out west. The fourth, a 20-year-old man, was AWOL from a Dundas battalion. In the best-laid schemes of mice and man, it seemed they didn’t realise they’d need to eat between Toronto and who-knows-where.  They stopped off at a local plum orchard and ate their fill. The farmer caught them and handed them over to the constabulary. Parents collected the three younger ones, while the soldier waited for military officials to fetch him. Boys will be boys, I suppose.

Pflaumenkuchen is a German yeast plum cake. It’s a yeast-leavened cake, like the Dreikönigskuchen, Today, I think we’d see it topped with streusel, but this version has the plum quarters sitting on a bed of dry breadcrumbs and then topped with sugar, as soon as the cake comes out of the oven. I’m certain you could use other stone fruits in this recipe.

Pflaumenkuchen (from German Cookery for the American Home, by Ella Oswald, 1910)
Prepare the dough as in the recipe “Blechkuchen” [below]. Let it rise to about ½ inch or more of the sheet of tin, then brush over with 3 oz butter (melted) and sprinkle with the same quantity of grated roll or dry breadcrumbs. Take 5 lbs of plums, stone them, cut into quarters lengthwise and place them closely side by side on the dough. Bake ½ to ¾ hour, and sprinkle thickly with sugar immediately on taking them out of the oven.

Blechkuchen
1 lb flour, 2 eggs, 4 oz butter, 3 oz sugar, ½ pint milk, 1-½ oz yeast Crumble the yeast into the lukewarm milk, mix well, pour into the centre of the flour in a basin, add the beaten-up eggs, the butter (melted) and sugar, and mix and knead well, beating with a rolling pin until the paste no longer sticks to the latter. Stand in a covered pan in a warm place to rise. When well risen, cover with it—about ½ inch thick or less—a well-buttered sheet of tin and let rise a little longer before covering with fruit, etc., to make Obst-, Butter-, Streussel- or Käse-kuchen.

Bloom the yeast and the milk a 500ml/(2 Cup) measuring jug and set aside.

Sift together the flour and 85g sugar. Set aside.

Mix the eggs with 125ml (½ Cup) of the melted butter. Pour into the milk mixture and stir well. Pour into the flour and knead. Adjust in the usual way to create a dough that’s soft and not sticky. Set aside to double in volume.

Press roll the dough into the pan and up the sides. Let rise for about 30 minutes or until the dough rises to about 1 cm (½”).

Brush the dough with the remaining melted butter and strew with the breadcrumbs. Snug the plums as tightly together as possible, cut-side up. Brush with melted butter.

Bake for 30-45 minutes until the bottom of the cake is golden.

Remove from the oven and immediately cover the cooked fruit thickly with sugar. Cool to room temperature.