Nothing but a flimsy excuse

As far as the name changers were concerned, the renaming’s delay was the attorney general’s fault. Waiting for the postmaster general’s okay was nothing more than a “flimsy excuse.” It seems the head postie would be proud to have a hand in commemorating the great British war hero through renaming the city.

City council’s special committee submitted their report detailing name change meetings in Ottawa and Toronto. After Alderman Cleghorn blasted the provincial cabinet for dragging its heels, he demanded it live up to its promise to rename Berlin.

The two sides—the pro- and anti-name changers—went at it at the meeting.

Alderman Gross accused the name changers of making a laughing stock of the city and said they brought a curse upon the community. The “unusually large” gallery audience hissed and laughed when the alderman said they’d be ejected if they didn’t allow him to speak his mind.

Cleghorn tossed the “pro-German” chestnut at Gross.  Gross, in turn, defended his and other anti-name changers’ Britishness, “…the men who are against changing the name of the city are just as British as anyone can be.”

Others who wanted to get rid of the German name leapt in. Alderman Master pled democracy. Alderman Hahn referenced the Dominion’s boys, fighting in Europe, “I sometimes think they might have better stayed home and gone to Toronto to fight for our liberty here at home.”

Council accepted the committee’s report and recommendation “that unless action be taken immediately by the Cabinet, a monster delegation be arranged to wait upon the Ontario Government to press the matter to a favourable conclusion.”

Gross rose to a point of privilege and objected to the onlookers’ behaviour. This, according to The Berlin Daily Telegraph, was “a signal for pandemonium.” Mayor Hett “vainly rapped” his gavel as the alderman shouted above the roar.

“At one point in the confusion, there were five aldermen on their feet trying to state their views, while the gallery vibrated with laughter and roars at Ald Gross to sit down.” Gross, with shirtsleeves rolled and fist doubled, pounded his desk as he asked for police assistance to bring the gallery under control.

Ald Schwartz, fed up with it all, walked out. “Ald Hahn added to the merriment and confusion by telling the aldermen to not destroy Ald Gross’ enjoyment, but to let him rave a little while longer. “

Things cooled off when the assistant city clerk passed around some water.

And church bells rang throughout the land

Order-in-Council was passed today changing the name of your city from Berlin to Kitchener. Proclamation will issue at once making the change effective from September 1st.

Hahn ordered the city bell to be rung, to signal the Ontario cabinet’s approval of the renaming. Factory whistles blew, and church bells rang “to the tunes of Rule Britannia and God Save the King. Word soon spread and “by three o’clock, King Street commenced to crowd up with people who were in a jubilant mood as the result of the glad news.”

The next day, Colonel Lochead telegrammed his congratulations:

Wire received. Hip, hip, hurrah. You have fought a good fight. You should see the boys smile.

“Rejoicing ran riot last night in a quiet way—if such a riot of joyousness can be imagined. The official changing of the city’s name to Kitchener was the occasion of the celebration and the reason for the quiet riotousness was because the victors did not wish to ‘rub it in’ to those who have been opposing the name change for the past months.”

Somewhere between 60 and 70 decorated cars queued in front of city hall, and followed the 108th Regiment band for the “monster parade.” Onlookers cheered enthusiastically, to which the drivers tootled their horns. Firecrackers and torpedoes boomed into the night sky.

Mayor Hett’s eloquent speech roused cheers from the crowd. He referenced the name change’s tensions, but the name changers won and “this was as it should be.” He reminded the crowd of the “peculiar conditions” here, and many in the community didn’t see the name change as a matter of celebration. “Now I wish to say tonight that in the joy of victory, the victors can well afford to be generous with those who have been opposed.”

He acknowledged the older generation’s efforts in community and city-building, and concluded his address with, “I sincerely hope, now that the issue has been settled by the government that both sides will forget the past with the bitterness of its strive. I hope that both sides will get together in harmony to make our fair city bigger and better than ever. I sincerely wish the city newer and greater success under the name of Kitchener.” 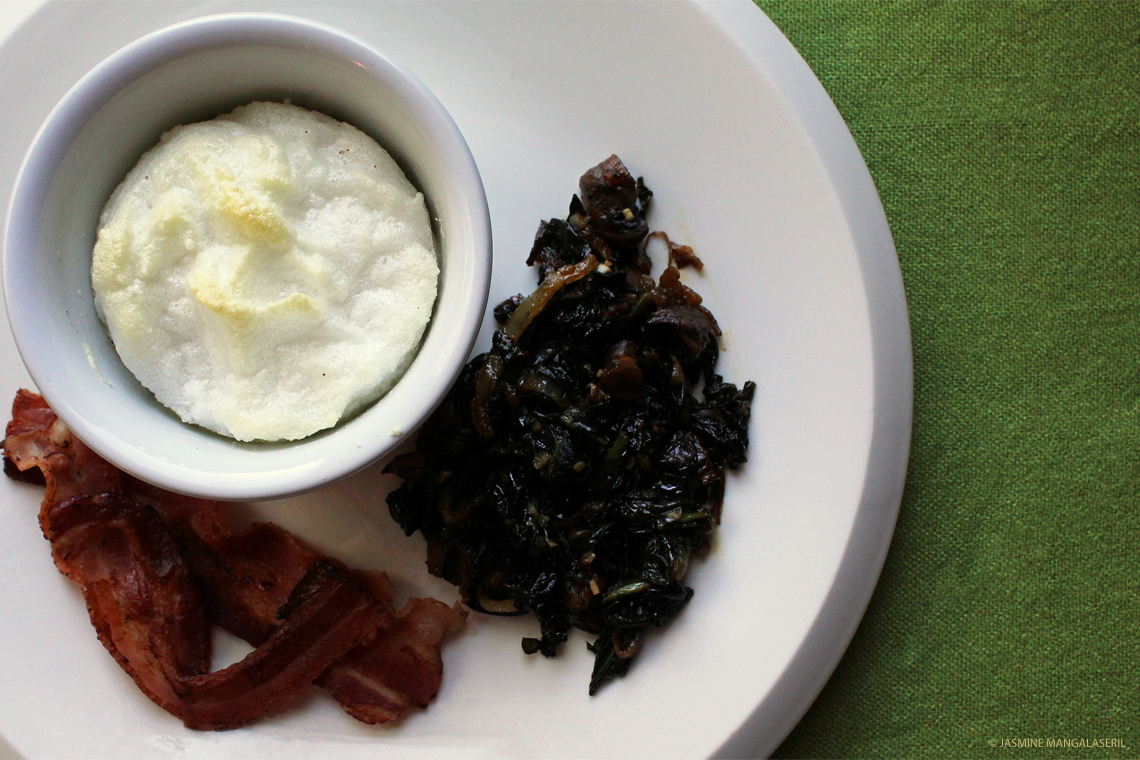 I think I did this recipe a disservice by making this egg an only child, but at the same time it’s a bit tidier to prepare them as individual servings (even if it does mean more dishes to do afterwards).

Eggs in a nest is a more complicated version of oeufs en cocotte/eggs en cocotte/eggs in pots. With oeufs en cocotte, you don’t beat the whites separately, but put the whole egg in the dish and then add the cream on top. While this version is a bit fussier, when cooked, the beaten whites take on a lovely pearlescent appearance. Cook the eggs as long as you dare—runny, squidgy or solid—but keep in mind the yolk will continue to cook a bit after you take it out of the oven.

Beat to a stiff froth the whites of 6 eggs, put these in a well-buttered baking pan, dip upon it 6 tablespoons of melted butter or sweet cream, 1 only in a place; upon teaspoonful of cream or butter drop one of the yolks, whole, be very careful not to break them; sprinkle a little salt and pepper on yolks, and a little white of egg. Bake in moderate oven about 10 minutes, be careful and not bake too brown.

Preheat oven to 180C/350F. Butter a ramekin for each egg (or a baking dish that will cook all of them), and set a kettle to boil (to make a hot water bain marie).

Add a pinch of salt to the egg white and beat to stiff peaks.

Place the unbroken egg yolk in the ramekin (or baking dish). Pour the melted butter on top. Season with salt and pepper. Dollop the beaten white over top.

Assemble a bain marie—the water should come halfway up the sides of the ramekin. Bake for about 15 minutes (or until the yolk is set to your liking)—it will continue to cook after the dish is out of the oven).