If you asked most people two summers earlier, many wouldn’t believe the war would last longer than six months. Experts poo-pooed the idea: all the numbers pointed to bankruptcy for any nation that embarked in an extended conflict. If the main players foresaw years of fighting, they might have stockpiled food, raw materials or armaments. Lloyds of London took bets on the war being over by Christmas.

Two years after Britain declared war on Germany and Germany declared war on Britain, Berlin, Ontario’s English-language newspapers marked the anniversary. They celebrated British and Canadian might, and highlighted German failings. According to WR Plewman’s editorial, which The Berlin News-Record ran, “The period of Teutonic victories has ended. The period of Allied victories has opened.”

The Berlin Daily Telegraph seemed to address concerns about the number of men killed in recent months—June saw a high death toll for the County’s boys, and The Battle of the Somme began in July. “Men are not being sacrificed needlessly. Where artillery can win a position, infantry men are held in check to consolidate the positions gained.”

As expected, Berlin’s city council marked the beginning of the war’s third year with a resolution. Pleased with the Allies’ success, and grateful for Britannia’s might, they acknowledged sacrifices must continue. “To all of which we pledge our hearty support and co-operation until the Prussian militarism is crushed and a world peace is arrived.”

The alien enemy amongst us

The war anniversary’s patriotism bump seemed to boost The Telegraph’s battle against central powers’ sympathisers on local soil and reminded readers that the area was rife with those who weren’t interested in fighting the good fight.

Apart from a downed German aviator who had papers that indicated a visit to Berlin, Ontario, the newspaper also reported “few outrages” by alien enemies in Canada. The article listed the Vanceboro Bridge bombing, and an attempt to destroy the Windsor munitions plant. The Dominion’s internment camps at one point or another housed upwards of 6000 aliens (and released most of them).  The Hon. CJ Doherty, who was responsible for the camps, was satisfied with how it was all going, and noted the Austrians “proved particularly inoffensive.”

Apart from one or two brief five-minute showers, more than a month passed since the skies last opened over the province. With most of the land as dry as tinder, fires ravaged the north.  The flames destroyed towns and villages,  threatened North Bay, and killed hundreds.

The Dominion government, Canadian Association of Boards of Trade, Canadian Manufacturers’ Association, and the City of Toronto formed a coalition to secure a $400,000 relief fund (approximately $7.8MM—see note on conversion) for the north. Telegrams asking for contributions arrived at various mayors’ offices. Berlin’s coffers were low, owing to contributions to other campaigns, but mayor Hett said the city would do its part. He also intimated the province should pay for the fund, to place an equal burden across Ontario, instead of expecting a few towns and cities to foot the bill.

With the last real rainfall on 29 June, “everybody was delighted that Jupiter Pluvius had included this locality in his travels” on 8 August. The downpour came at a critical time for corn and clover crops, but too late for some dairy farmers. The drought dried-up some pastures and forced farmers to purchase (expensive) feed. These, along with the general labour shortage, meant some London (Ontario) milk dealers raised prices to 8¢/quart ($1.56/quart)—previously, they charged 7¢ /quart ($1.37/quart).

The boys have clean khakis, kitchens, but no cucumbers

A Toronto laundry got the contract to clean the khaki-clad’s kecks, solving Camp Borden’s washing issues. The soldiers paid the weekly 25¢ fee ($4.89) from their monthly pay packets. Colonel Lochead asked his men to give the service a go before complaining.

Two field kitchens “of the most modern type” made their ways to the 118th. Made by London (Ontario)’s McClary Manufacturing Company, these kitchens on wheels were divided into two parts—one for cooking and the other for carrying water. Each unit had a metal plate inscribed with “Presented to the 118th Battalion, CEF, by the citizens of North Waterloo.”

The Telegraph issued a plea to locals because of high food prices and general produce scarcity near Camp Borden. “Vegetables are reported to be scarce and costly in the vicinity of Camp Borden. Friends and acquaintances of the boys of the 118th Battalion can make the hearts of the soldiers glad by sending baskets of tomatoes, cucumbers, radishes, lettuce, etc., occasionally.” 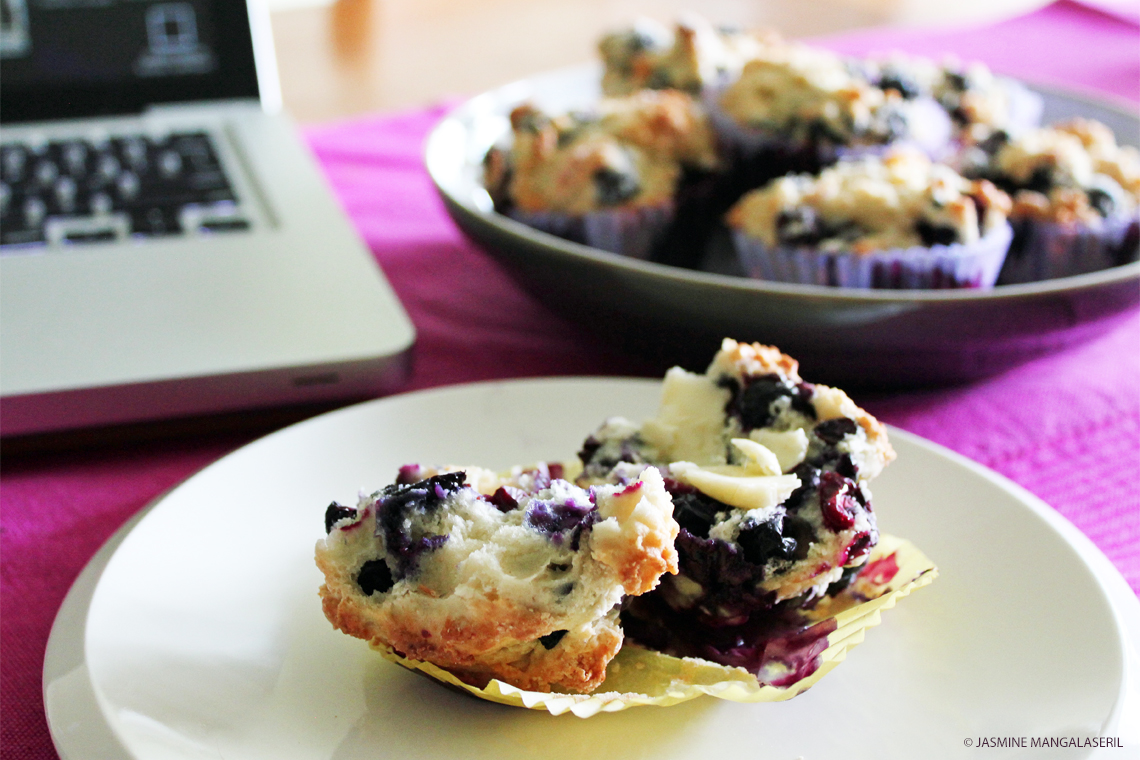 It’s sometimes easy to forget that muffins aren’t an excuse to eat cake for breakfast. Muffins (and gems) in 1916 seemed to be hearty little offerings of varying sweetness. This recipe is for the true blueberry lover, who’s looking for the barest amount of batter to hold together a cluster of fruit. It’s also for the blueberry muffin lover not looking for a light and spongy cake-like treat, but for something that’s more of a cross between a scone and a cake. Delicious with a lashing of butter.

Mix half a cup of sugar, half a cup of milk, two eggs, well beaten, a tablespoonful of butter and two cups of blueberries with two cups of flour, into which two teaspoonfuls of baking poser have been sifted. Bake 20 minutes in muffin tins.

Preheat oven to 190C/375F. Prepare the 16 bowls of standard-sized muffin tins in the usual way (paper inserts or butter and flour the bowls).

Whisk together the flour and baking powder. Set aside

Blend together the sugar, milk, eggs, butter and salt until smooth.

Stir the dry ingredients into the wet, until just combined. Fold the blueberries into the batter.