Kitchener will come in quiet

The city would inaugurate its new name in silence. The aldermen held a special meeting to discuss the momentous day. Alderman Cleghorn introduced a resolution that declared the city fathers were “of the opinion that no greater tribute could be paid by the residents of this city to the memory of the late Secretary of War, Earl Kitchener, than by foregoing the proposed celebration of the event and allowing the new name, Kitchener, to take the place of Berlin in silence in view of the recent tragic and heroic death off the Orkneys of Britain’s great soldier and statesman.”

Cleghorn invited Alderman Gross to second the resolution. It was a bold move. For months, Gross passionately argued to keep Berlin’s name, which made him a target of Cleghorn’s gang’s insults. While Gross happy not to celebrate the name change, he didn’t want others to think he liked the new name. He suggested instead of renaming Berlin, the city erect a monument to Kitchener after the war. His idea didn’t gain traction.

The resolution passed: Cleghorn and seven other aldermen supported it; Gross was opposed; Aldermen Reid and Zettel did not vote; the remaining councillors were absent.

A few days before council held their special meeting, Gross and about 200 Berliners formed the “Berlin Citizens League.” It was a non-political group, who wanted to ensure better civic government, and “to place Berlin right in the eyes of the Dominion of Canada.” Its members fought against the name change but declared, “every qualified voter in the city shall be eligible for membership in the League;” the group already claimed 500 members.

Speakers discussed the community’s roots and local manufacturers’ growth. They then contrasted the previous months against the idyll that preceded it, “unfortunately an element has come in which has brought strife and put Berlin in a false light. And we are largely responsible for the conditions. We, as ratepayers were not concerned and as a result men got into council who have given us what we have.”

They recognised Gross for his stand at city council and paid tribute to Mr HM Bowman who wrote “The Other Side.” After being elected to the executive, Alderman Reid talked about the benefits the organisation would bring to the city and how the men (presumably aldermen Cleghorn and Hahn) behind the name change movement “were not honest in their convictions.” Mayor Hett was pleased to see so many people in the room, especially since “few were out to see to it that the ratepayers were brought to the polls.” Hett had already announced he would not seek re-election, but some in the room hoped that Gross would take his place in the mayor’s chair.

The drought that ended a couple of weeks ago greatly impacted local farmers’ potato and sugar beet crops. The decreased spud haul continued a downward trend that began in 1914, but this year blights, rots and other diseases weren’t to blame.

With about a month to go until the Dominion Sugar Company’s factory began its 100-day production season, the ballyhooed harvest looked as if it would disappoint.

Farmers planted between 5000 and 6000 acres (20-24 km2) —considerably more than in 1915.  Unfortunately, the yield was only expected to equal the previous year’s. The only saving grace, it seemed, was beets were fetching high prices, so farmers would be able to recoup some of their losses.

The province announced 50 inspectors would be needed to enforce prohibition—fewer than currently employed. Each county would have one inspector, with larger cities having their own. Annual salaries ranged from $800-$1800 ($15,624-$35,155), with the average at about $1200 ($24,436). Salary was commensurate with the amount of work expected—inspectors in small counties would be paid less than $1000 ($19,530). Those who stayed on (or were hired) must be prepared “to give his whole time to the work.”

Bakers continued to struggle to keep bread prices down. Costs for ingredients, and labour, combined with customer complaints about increased rates lead some bakers to bake lighter loaves (and sell them at the old price for a full-sized loaf). The Western Ontario Bakers’ Association tried to put a stop to the situation and declared bakers must produce bread of legal weight. “By making lighter loves than the Act provides, these [bakers] have sold their output at lower prices than their competitors who were making standard weight loaves. “

To monitor the situation, the Ontario Provincial Police would inspect bakers’ outputs. Any less-than-corpulent crumb would be seized, and (presumably) would be toast. 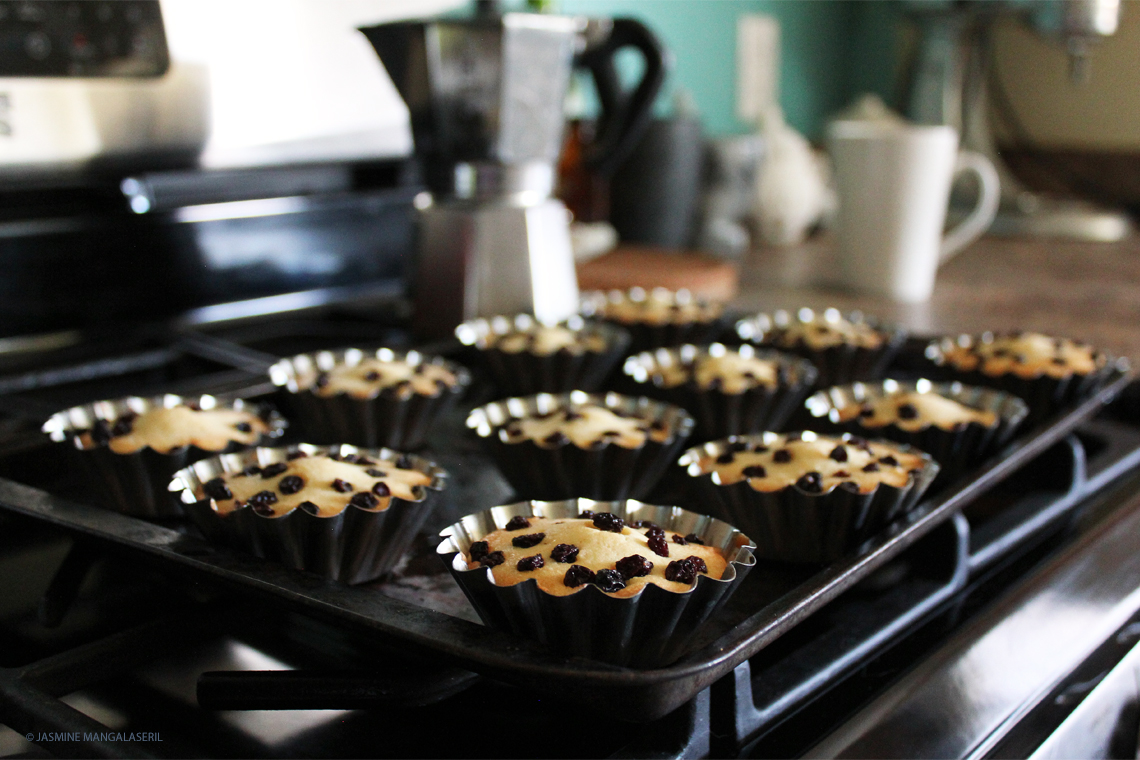 While not totally forgotten today, Queen Cakes seem to be shunted aside during the great frothy cupcake invasion of recent years. It’s a pity, because these little currant-studded cakes are charming in their own right, and pair nicely with an afternoon coffee or tea.

They are essentially little lemon-flavoured poundcakes or madeira cakes.  They are traditionally baked in well-buttered small moulds of varying shapes (round, square, heart, etc.), sometimes with fluted edges. A little bit of research shows these recipes for theses cakes go back to the first half of 18th Century, and continue appear in the 19th and early 20th Centuries.

Mix in the flour, sugar, and eggs, according to directions given in preceding recipe for Pound Cake. Add the lemon rind, and partly fill small well-greased Queen-cake tins with the mixture. Sprinkle a few currants on the top of each. Bake in a moderately quick oven for about a quarter of an hour.

Infuse the sugar with lemon by rubbing the zest into the sugar and set aside.

Beat together the eggs and the milk in a jug and set aside.

Cream the butter then beat in the infused sugar and salt.

Add the dry and wet ingredients in the usual way (see notes).

Divide into the prepared pans and sprinkle with currants (approximately ½ teaspoon per cakelette).

Bake for 30-35 minutes, or until done—the sides and bottoms will be golden and an inserted skewer will come away cleanly.

When cooled, dust with powdered sugar, caster/castor sugar, or ice with a lemon or vanilla glaze